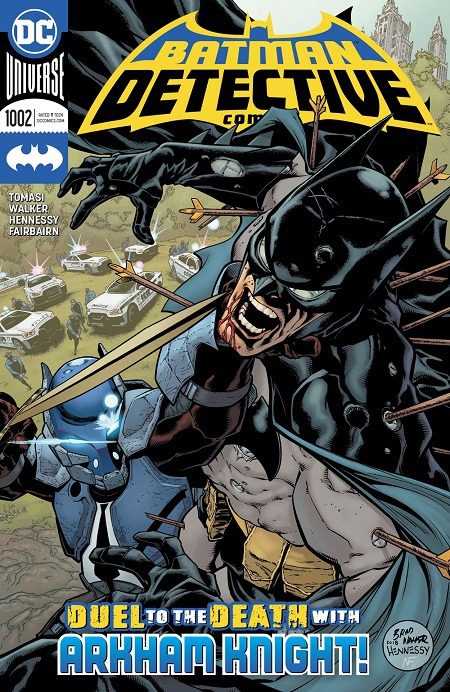 In a pitched battle that left the Dark Knight bloody and vulnerable, the Arkham Knight is prepared to deliver the final blow and bring Gotham “back into the light”. Unfortunately, his dramatic moment is ended by a hail of police gunfire. With the police caught in the middle of the battle, both Arkham Knight and Batman see where the other stands in regards to innocent bystanders.

With the fight ended, Jim Gordon helps Batman get into the batmobile and sends him back to the cave. With Alfred treating him, Bruce digs into the evidence he took with him. Damian tracks the remnants of the light bomb and decides to go after it. After an encounter with the Arkham Knight and his cult, Damian ends up a prisoner of the Knight and when he attempts to escape, he crawls right into the Knight’s clutches as the Arkham Knight finally reveals himself.

I can see a lot of potential in this story, but the character of the Arkham Knight still doesn’t resonate with me as a reader because I played the game he was introduced in. Tomasi does his best to bring some nuance and freshness to the character, but the effort would have been better spent creating a new character to be equal to Batman in this arc. It’s still a fun read with a great potential arc for Damian after he’s captured.

Brad Walker’s art is great but I think there were a few too many close-ups.