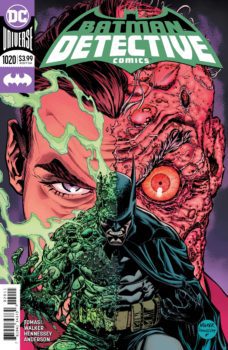 Harvey Dent has returned to Gotham and is ready to cut a bloody swath through the city.

The murder of twin coin dealers and the theft of rare 1922 coins can only lead to one suspect Two Face. When Batman arrives on the scene, his investigation will discover evidence not only of Harvey’s guilt, but also that the victims managed to fire off two shots that hit the villain.

As Batman searches the city, Two Face is being treated for his wounds. The damage seems to cause a further shift in his personality and Batman arrives at the aftermath of more violence and the unveiling of a new, loyal and vicious cult.

Tomasi strikes the perfect balance of detective noir and action in this issue. The story is solid and the twist with Harvey is a great addition. Creating and expanding Harvey’s influence is handled brilliantly and there are so many interesting aspects to this story to keep the reader engaged page after page. I can’t wait to see what happens when the characters deal face to face, but this new style of henchmen for Two Face is definitely worth exploring while the character himself slowly descends into a deeper madness than he is aware of.

Brad Walker’s art is fantastic. All of the action is big, bold and detailed. There are some great visual moments throughout and Walker frames the art to deliver a brilliant cliffhanger ending.