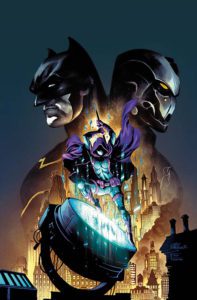 Stephanie Brown returns to Detective Comics to prove to Batman that the world doesn’t need superheroes. She faces off against the old Batman foe, Wrath. This has been a very interesting storyline that shines a light on the consequences of Batman’s presence in Gotham City, both positives, and negatives. Spoiler has never been so determined and focused; unfortunately she’s also devoid of everything that makes her a fun character.

The issue kicks off with Spoiler sabotaging the Bat-signal, and then moves to her handling the villain Wrath, her own way. I understand that she now has the mindset that superheroes do more harm than good, but I don’t get why. Sure, Tim’s supposed death hit her hard, but her reasoning for making Batman’s life more difficult is weak. She took out the Bat-signal and Wrath all while monologue but never really said anything of value. It’s great seeing her confident in her abilities, but James Tynion’s take on Spoiler has been kind of a bummer to read. Steph’s demeanor always reminded me of Nightwing’s, but lately she’s been tech-savvy and methodical like Tim.

I know a rebooted version of Wrath has shown up since the launch of the New 52, but I never read it. For this issue, he was a great choice as villain to show off Stephanie Brown’s return. The storyline takes a look at the dark side of Batman’s vigilante activity, and Wrath is a dark take of what Batman could have been. Wrath was defeated pretty quickly, but it makes sense story wise. In professional wrestling, losing to another wrestler to make the other guy look good is referred to as “putting someone over.” Well, Wrath’s sole purpose in this issue was to put Spoiler over, and it worked. 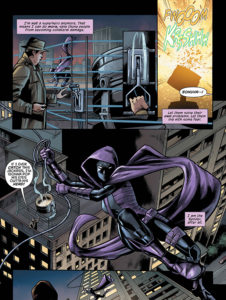 I didn’t hate the artwork, but I didn’t love it either. It reminded me a little of the old Hanna-Barbera cartoons, which isn’t a negative, but it’s not what I look for in a Batman comic. Maybe I’m just saying that because Harvey Bullock looks a lot like Fred Flintstone in this issue.

I’m excited to see how Batman handles being called out on, but I really hope that this isn’t the permanent direction for Stephanie Brown’s character. She’s been mopey and depressed since Detective Comics relaunched, and I hope that Tynion plans to eventually give us the Spoiler we fell in love with years ago. Her solo series written by Bryan O. Miller was phenomenal. The thing is, Tynion’s story telling has been great, he has been exactly what Tec needed as a writer, but I’m not sold on the fact that he knows how to handle Spoiler.