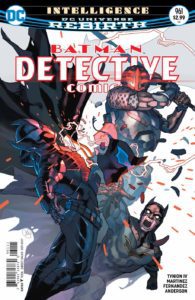 The St. Dumas programming has regained control of Azreal and Jean Paul tries to break free from its hold.

They are really playing up Bruce’s desperation to get Tim Drake back. As the flashback with Zatanna shows us, he is willing to risk a lot by attempting to use the orb. It reminds me of a very underrated storyline that occurred in the Batman and Robin comic book that happened after Damian Wayne died. Bruce was trying anything to bring his son back to life and it leads to a really creepy scene with Bruce dissecting Frankenstein to learn how he’s alive. A Batman that loses himself in grief is a scary guy and I keep waiting for him to pull something on Zatanna. So far they are only reminiscing and it’s been very entertaining.

Azreal’s fight with Cass and Batwoman was as brutal as you might expect. Really great action sequences by the art team in this comic book. By the end of the brawl, Batwoman looked like an absolute wreck. It was one of the best fight scenes in the Rebirth run and came out of nowhere. Love the call back to past storylines when Zatanna showed up; you really have to credit Alvaro Martinez on this one because his pencils have been gorgeous. 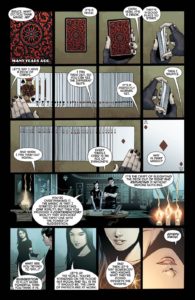 I’m not totally sure what direction they’re going in with Azreal but after the big reveal at the end, you can’t help but feel it’s something important. His hevanscape scenes were pretty thanks to this art team. Kudos to the colorist for using a lot of light colors without making it feel monotonous.

Luke Fox’s big surprise was ruined by the announcement DC Comics made days earlier, but even so, it was a great sight to behold. I really like how they’re tying Fox into everyone’s costumes. It connects him to the heroes in a way that’s endearing and helpful, it’s what makes Cisco in The Flash tv show so likable. He’s always coming up with nicknames, gadgets, and costumes, which is what Luke should strive to become. Though in this series he is clearly an Iron Man substitute.

Have you seen this:
Army of the Dead (Review)

Beautiful art and great action scenes made this the best issue of the story arc. The Batman and Zatanna flashbacks have been excellent and are really starting to pay off.