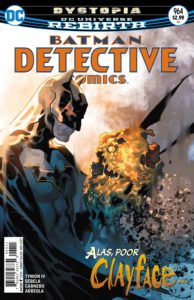 Stephanie Brown visits the community under Monstertown where she meets up with old friends. Meanwhile, Anarchy attempts to bring her into the fold of his utopia.

Despite being titled after Clayface, this issue was very Spoiler and Anarchy heavy. Which is a shame because arguably some of my favorite Batman stories involve the shape-shifting villain. He’s such a tragic character, I’d put his Batman: The Animated Series episodes on par with “Heart of Ice.” What we did get from Clayface was him finally losing control and lashing out at Victoria, who is trying to find a cure. I’m still on the fence about making his evilness a side effect to his powers. On one hand you can play up the Jekyll and Hyde aspect, which is new to the character. But on the other hand it makes him a product of circumstance, and somewhat lessens the journey of the characters redemption.

Have you seen this:
Future State Wonder Woman #1 (REVIEW)

He still has to make peace with the monster he’s become, but now a simple cure would make him a good man. Which is where his relationship with Mudface comes in, it forces Basil to answer for the sins of Clayface, no matter if he gets cured or not. Speaking of relationship, I’m not sure how I’m suppose to feel about the Clayface/Cass pairing. It feels somewhat romantic but I always took Cassandra Cain as being a teenager and Basil as being an older man. Maybe Rebirth changed that but I wish they’d make that clear. It’s actually really sweet and I want to like what their doing, but it’s also a bit creepy for all the wrong reasons. 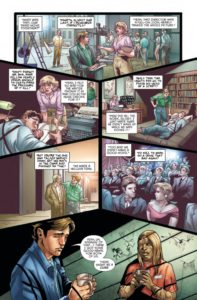 Admittedly, I was more interested in the other plot line, but I loved this issue for Stephanie Brown. They way she handled Anarchy in the face of conflict was really great after seeing her turn her back on Batman. I’ve been very critical of Steph’s portrayal in the past, but James Tynion really separated her from the pack and built her up as a strong character.

I thought the art team did a good job overall, but I was confused with the Anarky confrontation. Maybe it’s just me, but it felt like there were panels and story beats missing. Batman popping out of nowhere is normal, but something about the where everyone was standing felt off. The action looked fine but the placement of the characters sometimes left me disoriented. Could just be me, but otherwise it looked ok.

I’m enjoying the story and I’m really loving the hell out of the team. It makes me want to see them come together again. Perhaps Tim Drake will be the glue that the team needs. In some ways, this comic book feels more like a family drama than a superhero story. Which is actually refreshing amid all these epic events taking place.