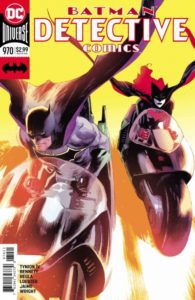 When future Tim Drake returned to his own time and his role as Batman, he left his present-day counterpart with a warning. One that all of the members of the Bat-Family should take heed of every once in a while. As Tim wakes from a nightmare involving his future self, Stephanie is there to comfort him. After reminding him that he does need to take some rest after being thought dead for months, Time decides to tell her of all of the plans that he has for the Bat-Family, specifically incorporating Oracle’s systems and taking over parts of the GCPD to increase response time between strike teams.

All of Tim’s plans are compelling and scary at the same time, especially his uncompromising need to implement them as soon as possible. Meanwhile, Batman is leading a team to take on a mystery truck smuggling something out of Santa Prisca. When they determine what the truck is actually smuggling, the hunt for answers begins. While the team tries to narrow down who their latest threat is, many of them are dealing with some personal issues during their downtime. Kate has to deal with her father and his connection to a recent drone attack against them. Batman and the team take on a group of Cyber-Assassins and Clayface might be another step closer to a cure.

Have you seen this:
The Nice House On The Lake #2 (REVIEW)

At the Belfry, Tim and Stephanie confront each other about the secrets that have been looming over their relationship since Tim returned. When Stephanie leaves, Tim decides to track down Anarky and discovers that the former inmate has gotten mixed up with the Victim Syndicate. Putting Batman in the background of this story is a bold choice by Tynion IV. There are moments when it works well and others that leave me a little cold, but the overall story works. I enjoyed Bennett’s visuals in this issue a lot. There are some great details in the backgrounds and some truly evocative emotions in some of the close-ups.

Detective Comics has done a really good job of promoting and emphasizing the team dynamics of the Bat-Family and it will be entertaining to see how those dynamics are challenged going forward.