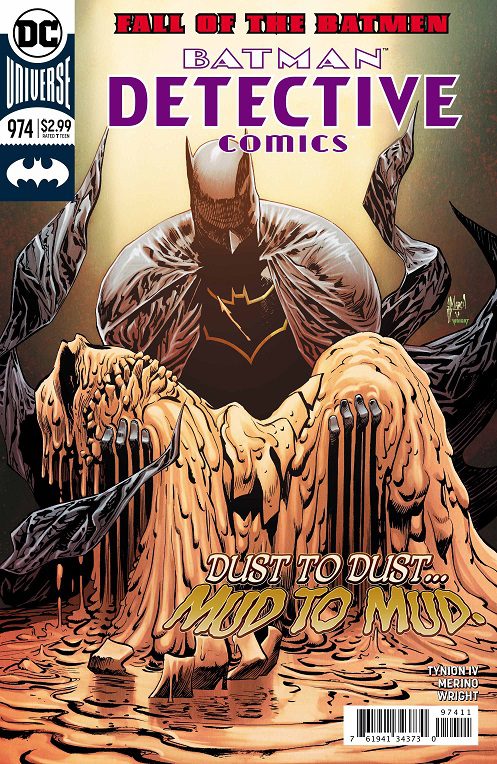 At the end of the last issue, Batwoman made a decision that will have repercussions for the entire team in the aftermath of Clayface’s rampage through Gotham. As Clayface begins to dissolve in Cass’ arms, Tim brings Doctor October over to see if there is anything that she can do. She explains to them the situation and it is not good. On the rooftop, Batwoman is confronted by Batman, who is not happy about the decision she made and what it means for the team. He confronts her about taking a step not sanctioned by the symbol she wears and, to her credit, Kate does have a compelling argument for making her decision.

She’s interrupted by Tim, who recalls the circumstances that brought the future Tim to attack them in the first place and he thinks that what Kate just did might be the catalyst for that future. As Kate defends her actions, she forgets about the one person close to Clayface, Cass. Her act forces Bruce to make a choice. One that starts the division of the team with Batwing and Azrael siding with Kate and the rest of the team agreeing with Batman. At Arkham Asylum days later, October visits one of Clayface’s victims and she gives her a gift. Tim has gone back to the Belfry and is thinking about how to rebuild when Stephanie comes in to give him some information that he isn’t prepared to hear.

As Tim and Bruce deal with the balance of Tim’s life, Batwoman is offered a chance at a new mission and another enemy decides to use this fracture in the team to make his move.

The dark, direction, Detective is taking with this storyline continues to impress. This was really well done and I enjoyed the fact that there were no easy resolutions and the complications whether staged or consequential, all seemed to feel natural and they helped to progress the story in a satisfying way. The art was well done as well. Briones took an issue that didn’t have a lot of action and managed to convey the drama of the story with panel angles and a good use of shadows.