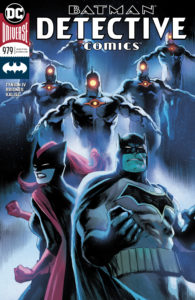 Ulysses has made his move and Tim is caught in the middle as he is being taken over by Omac nanites. As they physically consume him, he sees visions of the future that his future self, told him about. In the cave, Cassandra fights to free Tim from the Omac troops. Batman and Batwoman are taking on the Omacs at the Kane family home and realizing that the troops have gotten an upgrade in their fighting style. The intervention of the rest of the team is enough to stop the troops temporarily. 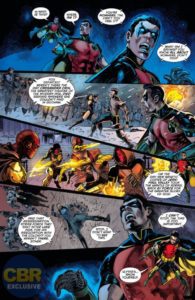 Tim’s battle in his mind with Ulysses is the highlight of the issue and it is used as the culmination of many of the storylines stemming from Tim’s missing time. His personal fight is interesting, but the choice of villain isn’t particularly compelling. Ulysses isn’t a good villain and that’s evident in his scenes with Tim. More time with Bruce in the story would have been more effective as he seemed relegated to reacting to the situation rather than being a detective and finding the truth. Ulysses next move puts more of the suspicion on Tim as Batman makes his way back to the cave to rescue Cassandra and they go find the one person who can talk some sense into Tim before it’s too late.

A pretty straight-forward continuation of the previous story and it works for the most part. The plan is pretty solid and I like how it connects to Tim, but the villain chosen for this story is not compelling. Ulysses doesn’t rate particularly high as a villain at all and his presence is more of an annoyance than anything else. I want to see where this story is going, but I find myself less interested in the continued presence of a sub-par villain.