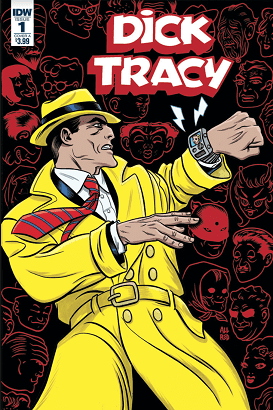 Dick Tracy: Dead Or Alive #1 is a new series based on the classic character that some of you may know from either his old comics or cartoon series. I never read much of the old comics myself but I had watched quite a few episodes of that cartoon series so I was excited to see a new comic was happening. After reading the new issue, it’s a very by the numbers book that really tries to be what many imagine old comics were like. It’s definitely cheesy with some goofball humor.  We do get some really good moments as we watch Dick Tracy always fight for the law regardless of who is in charge.

So the issue starts off with Dick finishing off chasing a criminal but this inadvertently causes him to lose his badge. The rest of the issue brings us a group of crooked members in charge of a city and it’s actually funny how Dick Tracy gets involved with them. The art is also something that I think will be more appreciated by fans of the older comic but it won’t do anything for a new audience outside of younger kids. Now I don’t think this comic was trying to be anything outside of what the old ones were like and that’s why I think this issue won’t really reach to many people. The story structure is very simple and very much of what golden age comics are like. In that retrospect, this can be a fun read for those that like that sort of thing just for a good laugh. However, I think that only really works for characters that fans are really into. When bringing back an old character for a new audience, this book does very little for a new audience and I won’t blame them for passing on it.

I do think Dick Tracy can come back in a great way for comics. A good detective story can definitely be told with this character but it all depends if they want to stray away from what many may know him to be like from his initial creation. Dick shows he still has some good characteristics to play with and a very good sense of humor to the criminals. I think this issue could’ve been something more, but we’re given a retread of what things were like in the old times for comics.