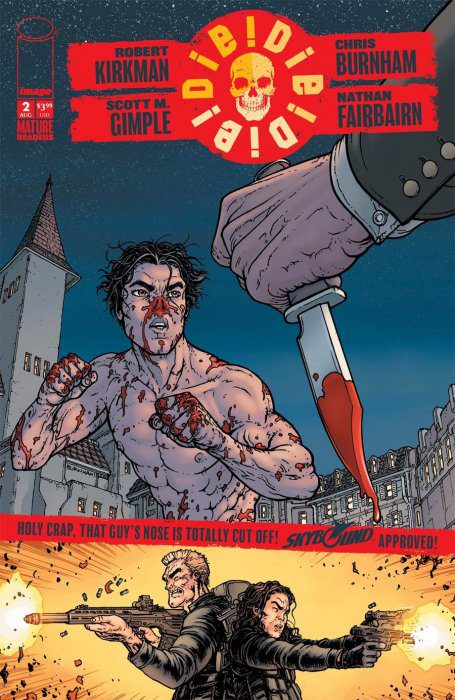 Last month we saw an assassin get captured and then have his nose removed, this month we get to find out why. It turns out, he’s one of three triplets and they’re all master assassins! Kirkman has proven himself to excel at world-building, as shown in the recently concluded Invincible, and Die! Die! Die! looks to be no different. Much like the John Wick universe, Die! Die! Die! presents us with a world of assassins and secret auctions. Our noseless friend from the first issue is up for sale and it’s up to one of his brothers to save him.

The skillful writing of Robert Kirkman takes an interesting premise and uses this second issue to build on top of it. Kirkman, along with “co-pilot” Scott M. Gimple (a showrunner for The Walking Dead), takes three identical siblings and quickly gives them each an individual viewpoint complete with motivations and character traits.  It should be noted that this title is intended for mature readers and it doesn’t stray from this tag whatsoever. Panels are filled with graphic violence, yet, unlike my criticisms of Hit-Girl, the violence serves the story and only furthers breathes life into the characters. Whether it’s an assassin taking out a crew of thugs or a shady government agent engaging in sex acts in her office, each vulgar scene only further sets up the dark and dangerous world of the series. 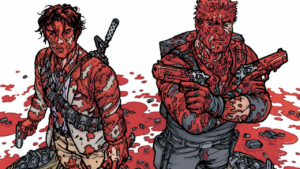 A mature series such as this is a tough sell for readers and Die! Die! Die! is no different. For those that are inclined, skilled authors such as Kirkman learn how to master this shift and use the shocking violence to further build their fictional worlds and characters. Artistic choices of this nature, such as Kirkman and Gimple’s choice to set Die! Die! Die! during the Obama administration, are not necessarily meant to shock readers but more to make us think about the world around us.  Hopefully, Die! Die! Die! will continue with its promising first issues and use the graphic content to tell a great story.