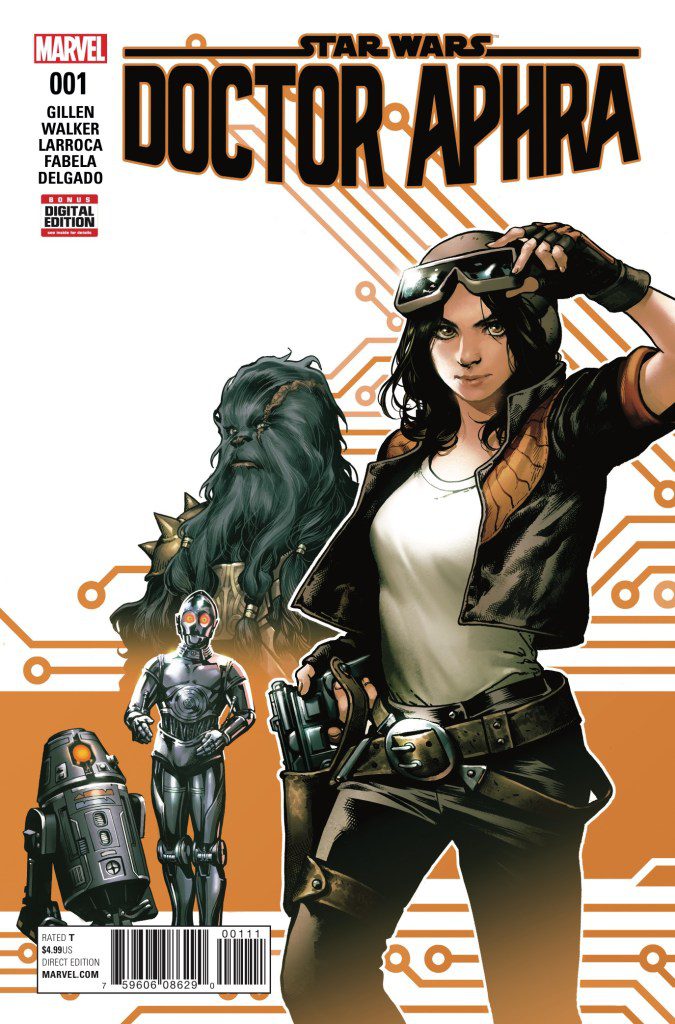 “The FIRST Issue Answered my BIGGEST Question about Aphra!”

Warning: This issue of Doctor Aphra was released in Dec 2016, so we will be talking spoilers.

During the height of the Empire’s reign, Aphra has found herself in a position that many of us can relate to: broke and loaded with debt.

When we last left the off-beat archaeologist she had successfully faked her own death at Vader’s mechanical hands. The Empire may not be actively looking for her but her creditors are another story.  She owes large sums to the Wookiee warrior Black Krrsantan as well as the shady finance company that holds the lien on her ship: Ark Angel II.

The issue began with Aphra getting the drop on her short-lived partner. The fellow dirt-digger, Ulbik Tan, had already betrayed her and left her for dead. Aphra survived but decided to let him finish the job, shoot him, and claim the prize. I knew there was a reason she had a space PhD!

Aphra had successfully survived and retrieved an object of great value that acted as the MacGuffin for the issue. The relic reminded me of a stone protocol droid head. It had some vague significance to galactic history but for Aphra, it was a surefire way out of debt.

Aphra returned to the ship and met her droid sidekicks, the beloved and homicidal, BT-1 and 0-0-0. Both of these characters have represented the anti-Artoo and Threepio respectively since their introductions and have been amazing additions to the Star Wars canon.

There was a funny moment when the droids exchanged credits due to a bet over whether or not their master would return alive. (Bee Tee won, by the way.)

There was little time to celebrate. The droids informed the good doctor that she had guests awaiting her with open palms. The ship’s loan was long past-due. Aphra reminded us that Stars Wars isn’t all lightsabers, starships, and gorgeous princesses in slave costumes.

Even galactic thieves and space Doctors have bills to pay.

Aphra laid on her usual charm and stalled for time. She requested Triple Zero awaken Krrsantan. Then she won my heart, even more, when she quickly pulled a “Marty McFly” moment on Soo-Tath and his giant furry bodyguards. She pointed in the other direction and shouted:

Just like Biff Tannen, the lumbering Gigorans fell for the ploy and looked for a small moon and/or space station. Unfortunately for Aphra, there were no hover boards in sight and she received a smack across the cheek which sent her flying several feet.

Oh, the hazards of nontenured doctorates.

Luckily, Aphra’s Wookiee companion, Krrsantan arrived and saved the day. His heroism wasn’t due to chivalry or a noble life debt like the one between Han and Chewie. Aphra just owed the madclaw a lot of money too.

Have you seen this:
Change My Mind #102: MCU Rewatch Vault - Guardians Of The Galaxy

When he arrived, Aphra quickly wagered that month’s ship payment against a bout of fist cuffs. The fight was set for Gigorans vs. Wookiee. Soo-Tath liked his odds and took the bet against the big walking carpet. 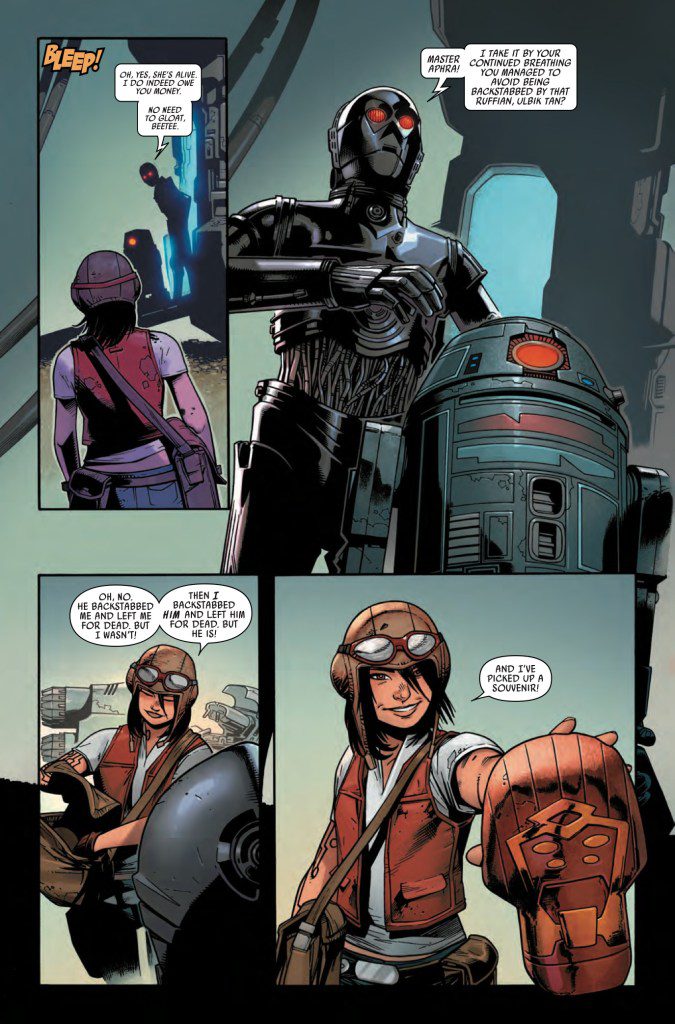 Big mistake. As we all know, the Wookiee always wins.

The day didn’t get any better for Soo-Tath after his failed collections payment. He died in a most undignified manner at the metal hands of Triple-Zero. The assassin droid injected him with a death serum that would look like a heart failure. He died in a crumpled heap in the bathroom floor after losing his hat and revealing his head looked just like a giant penis.

His counterpart, Bee Tee, an astromech with enough firepower to level a rebel base, beeped in disappointment. Unlike the subtle protocol droid, Bee Tee preferred a more lively display of killing. Mostly involving fireworks. Triple Zero made it clear to Bee Tee that he may not burn the body.

Bee Tee argued in response with another set of beeps. This is where Triple Zero gave me a line that made me laugh out loud:

Triple Zero: “No, spontaneous human combustion is NOT a thing.”

The Ark Angel II then arrived at Archaeo-Prime, the Cosmatanic Steppes. Aphra gave a bit of exposition as to why this site was important to galactic archaeologists while Krrsantan (much like the reader) began to nod off. Aphra ranted about the riches that awaited them all.

And then she fed the universe a line that would backfire in any galaxy no matter how far away:

Aphra: “Chances are, by the end of the day we are going to be rich.”

Of course, in the very next panel Aphra is told by an annoying droid that she can’t sell her artifact at all. The problem isn’t the relic; it’s her. Something has come to the attention of a governing body known as “The Archaeological Association”. They cannot verify any of her finds and, as a result, her doctorate has been suspended.

Aphra began to wonder who ruined her record as a legitimate archaeologist. She claimed that she discovered the Abersyn Symbiotes of Boothi XII to the droid. Then she privately told Triple Zero that she had cheated:

Aphra: “I mean obviously I cheated. But how did they find out?”

Apparently, Aphra hadn’t had enough of feeding the universe obvious openings that day. Her question was quickly answered by a character off-panel:

“Well your questionable morality was always going to catch up with you eventually beloved …so perhaps it’s lucky that someone who loves you was the person who uncovered your ethical lapse. And now we can look to your spiritual salvation…”

The character was sporting a Charles Xavier hairstyle and has the look of a space priest in flowing white robes of purity. His sanctimonious speech and terms of familiarity and endearment automatically tell us this is someone close to Aphra.

We don’t have to wonder for long. Aphra left the readers on a cliffhanger with the short response: 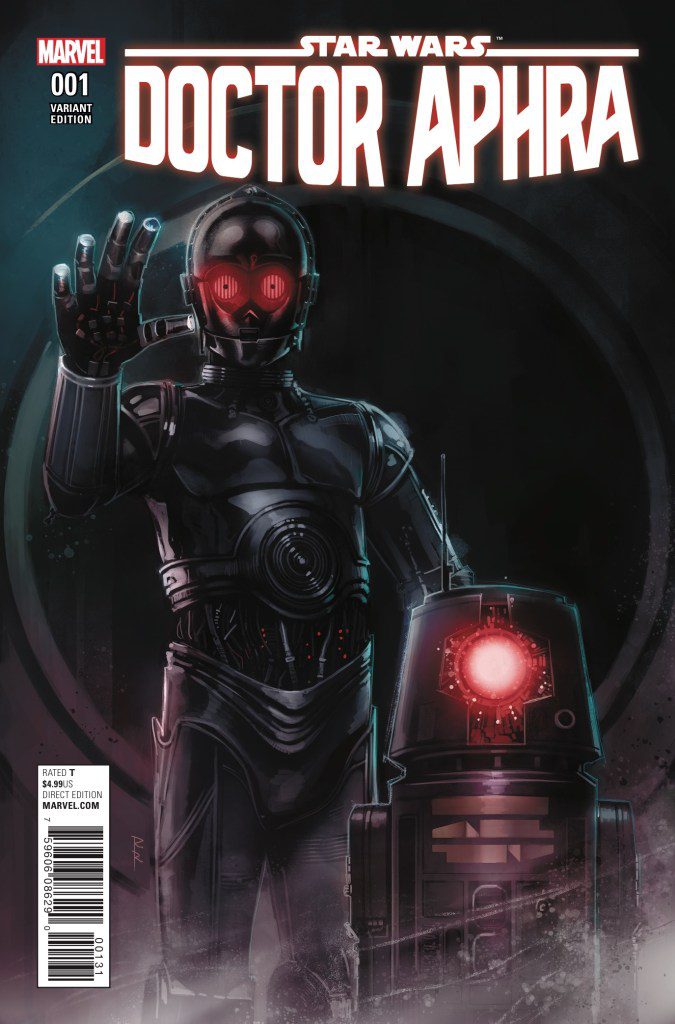 Wow! I had wanted to know more about Aphra’s backstory and this first issue did not disappoint. We know little about her past but now we know her father is a religious man who obviously cares for her in his own way. I imagine they spent many years at odds with one another over their differing outlooks on life.

But wait, there’s more! Don’t forget to read after the credits, because the short story afterward is NOT just a filler.

After the credits, we received an answer to the BIG question I had about Dr. Aphra:

Where/How did she become a doctor?

I am a Masters student of History myself. Archaeology is a different field but we both investigate the past and attempt to bring it to life. Aphra lives the life of a mad historian.

In this bonus story we also received a bit of insight into what Aphra meant when she told the droids she had recovered the Abersyn Symbiotes of Boothi XII.

These Symbiotes had actually been the life’s work of her professor Sava Toob-Nix.

Years back, Aphra had attended the University of Bar’leth (a college I am now googling for t-shirts and hoodies). Dr. Nix was her supervisor and she needed his approval to complete her doctorate. That was going to prove difficult. Dr. Nix saw Aphra as a disgrace to the profession and let her know in no uncertain terms:

Nix: “All those years mocking me you never thought to ask why I selected you for my doctoral supervision. Because I was never going to let someone like you be a doctor.”

When her own project turned out to be a bust, Nix showed her his amazing discoveries of the Abersyn Symbiotes. They were highly illegal in the Empire but the doctor had spent years studying them. He mocked her and told her she would never become a doctor and it was because he hated her.

Wow. Most of us would simply give him a low score on RateMyProfessor.com.

Instead, Aphra stole his Symbiotes, hid them somewhere on the planet, and then became a hero when she acted as if she discovered them.

Her professor couldn’t say anything because he would have had to admit he had been keeping them illegally for decades. And scientists on Boothi XII planned to dedicate years of study to find out how the Symbiotes could have existed on that world.

Aphra: “Er…Yeah. Good luck with that.”

So my question was answered: Aphra became Doctor Aphra by cheating on her thesis with a flashy discovery that she orchestrated by stealing the work of another archaeologist.

This was just the first issue! I loved the flashback and would love to see more of Aphra’s past. She’s also a major cautionary tale to academics on what not to do.

Now, please excuse me while I triple check my sources for plagiarism for my Master’s thesis! I wouldn’t want any Symbiotes accidentally slipping through.

If you love History AND Doctor Aphra, you might love my book of ALTERNATE history!