Doctor Who: A Confusion of Angels #3 REVIEW 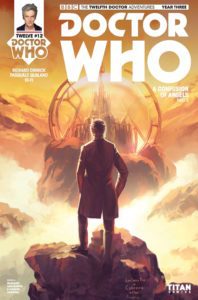 Miss me? It’s been a while since I reviewed a Doctor Who comic for you guys, and I’m glad to be back. However, I hadn’t read the first two parts of this comic arc, so I may be missing a few key parts in the story, but I believe I understood what happened enough to fully appreciate, and enjoy this issue of Titan Comics, the Twelfth Doctor series. Do you remember the Hosts from the Tennant era? Those golden Angel robots? Ever fancy them being in the same story as the Weeping Angels? Well, this is your lucky day! Angel versus Angel, with some Judoon thrown in for good measure. 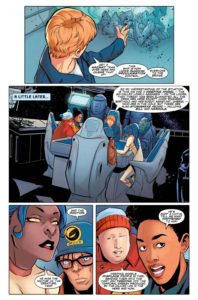 The Doctor was displaced through time by a Weeping Angel, leaving Bill Potts and Nardole alone on the ship being held by a Judoon ship, and running rampant with Hosts and Angels. A mysterious man in a clown mask shows up, and guess who? The Doctor is back! Just in time, like always. What? I’m not saying that’s a bad thing at all! The hero always arrives in time, right? And who better than the Doctor?!

Of course, we’re left hanging as we discover the Weeping Angels had been feasting, and both ships are falling into the Sun they were orbiting. 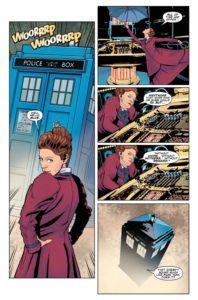 Boy, do I want to find the first two parts now. I’ve been on a comic kick lately. Devouring any and all comics that I like, especially Doctor Who.

What else did you expect from this Who-fan, haha.

Now onto the other part of my review, the art! I love art. Creating it and seeing it. Comics allow me to see varying types of illustration styles and coloring styles, and it makes me beam with pride to see so many variations and such talent! In my eyes, I saw the combination of illustration and coloring as more of a traditional style, that you may see across all comics.

Don’t get me wrong, I say this as a compliment, as it gives me a nostalgic feel for the old days of comics (I may be decently young, but I’ve been reading comics for all the years!). And the shadows… so good!

All in all, I loved this comic. Honestly, did you expect me to not like it?