Doctor Who The Lost Dimension Book One 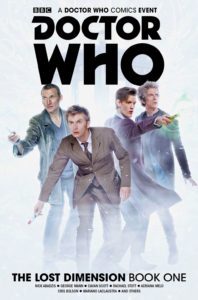 Doctor Who: The Lost Dimension Book One
Titan Comics

Have you ever watched a special on television that had these epic appearances that made you squeal and punch the air you were so excited? That is me whenever I watch the Doctor Who anniversary specials, like “The Three Doctors,” “The Five Doctors,” and “The Day of the Doctor.” But could I ever get this excited from a comic? YES I CAN!

“The Lost Dimension,” an epic multi-Doctor comic special from Titan Comics had me geeking out at every turn from the amazing art, to the epic cameos from almost every Doctor - hopefully more to come in the second book. 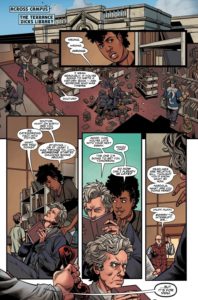 *I can’t get my geeking under control, and I’m drinking coffee, send help!*

Where… where even do I start?! It’s so epic, it’s beyond order, it’s beyond rational reviewing, it’s… it’s… just amazing!

Yes, I am a massive Doctor Who fan, but I could’ve hated this beyond belief, and have been disappointed, but that is so not the case. I loved it for it’s tasteful use of cameos, and how each Doctor is connected by this electric looking virus spreading sideways through time, infecting anyone it touches. Should I share some spoilers? 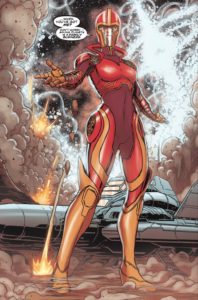 It’s killing me, I want to, but I think you should read it for yourselves to truly get the hype that I’m feeling right now. However, some things have already been circulated around online so you’re probably well aware that Jenny, the Doctor’s “daughter” makes a return in a swanky new suit, meeting her Dad during different eras, but popping in for tea with Twelve, Bill, and Nardole - and Twelve is very happy to see her. Will she play a major role in stopping this weird force in time? Maybe. I haven’t read ahead, so no spoilers here from me!

*But I want to spoil things so badly!!!*

The art, as usual, is top notch from all the artists involved. I mean, did you see that before this article started? All those artists?! How amazing is that? All the artists working on their respective Doctors, it’s amazing.

*Geez, Jess, how many times are you going to say ‘amazing?’*

*I need to stop drinking this coffee…*

Oh, one not so spoiler-y thing I can share is that Osgood makes an appearance, and she’s dressed like the Sixth Doctor. *squee*

It’s 130 pages of pure Who-goodness with tastefully placed Doctor cameos that will have you tip your hat in admiration, and then throw that hat because you’ll be dancing about in pure happiness and geekiness. All in all, this is one magical comic… and I cannot wait for Book Two!

Cavan Scott Doctor Who george mann nick abadzis titan comics
Are you an Insider?News, reviews, & updates are just the beginning.