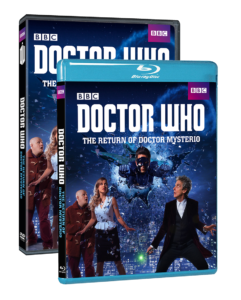 Harmony Shoal is back and waiting patiently for you to turn your pretty, little head in the Doctor Who: The Return of Doctor Mysterio DVD/Blu Ray with extra features released by BBC Home Entertainment. I was hooked from the moment I saw swinging, red satin. He then turned on that new sonic of his, and it was over.

Once again, the Earth is in jeopardy. Fear not, as the Doctor is on the case, and he’s brought snacks. How would a superhero work in the Doctor Who Universe? Quite nicely actually! There was movement in the scenes that reminded me of the pages of a comic. This origin story was cute and really a departure from Doctor Who Christmas Specials past.

It’s been 24 years of saying goodbye to River, and we get to see 12 for the first time without Clara, without River, or really anyone that connects him to 11.

Everything ends, and it’s always sad. But everything begins again too, and that’s always happy.

He starting a new chapter and seems softer than when he initially asked if he’s a good man. He’s lost it all. Yet the drive continues to push forward and be what he (and everyone else) needs. 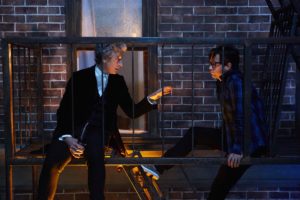 Grant, played by American actor Justin Chatwin, starts out as a child and quite honestly stays that way. He’s fun and smart. However, it takes a special guy to fly around with tights and a cape. He never really grew up. He remains as uncomfortable and awkward but with a thirst to help wherever he can. I loved the dynamic between him and the Doctor from the very beginning.

What would a superhero be without a story-hunting, love interest? Lucy is gorgeous, smart, and so oblivious.  This convoluted story is classic, fun and completely over the top! 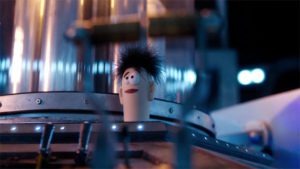 Harmony Shoal is a freaky adversary introduced last Christmas. They are intent on ruling the world one brain at a time. Skin-wearing brains were quite fitting and helped to bridge the one-year gap in the show.

Disappointment only started with the extra features. The disk is about the same price as any summer blockbuster. With just over 30 minutes of special features, it left me with a feeling of “that was it?” I would have given full marks but would have loved to have seen some outtakes, deleted scenes, commentary, or something, well, special.

Steven Moffat wrote this episode devoid of tragedy and the typical weightiness of a special. Many aren’t thrilled with the lighthearted nature of the story. However, I felt that we needed an emotional break from the recent storyline. So, this was a nice reprieve.