Doctor Who Twelfth Doctor Year 3: Beneath the Waves #3 Review 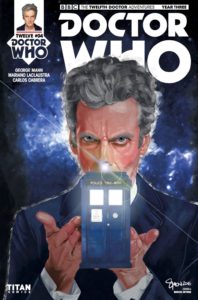 Doctor Who Twelfth Doctor Year #3: Beneath the Waves Pt. 3 of 3

I’m back with the finale of the cracking three-parter starring the Twelfth Doctor, Hattie, and sea-weed Golems. 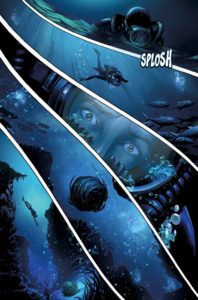 In the last part, it left us hanging (oh those cliff-hangers!) with the Doctor being dragged under the sea by two sea-weed Golems. He willingly went, but I have a feeling he didn’t think he would be drowned. He was fine, though, as Hattie discovered when she dove in after him in a diving suit; he was wearing a respirator… no doubt in his pocket the whole time, that scarily handsome time traveler from space. 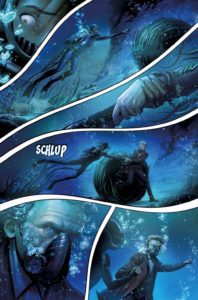 It turns out, an alien craft was trapped… wait for it… beneath the waves! (haha…ha… I’ll go.) However, it was in a sleep stasis, only to be awoken due to the crumbling and erosion of the cliff face over the water it was buried under, awoke it. Now, it sent out those Golems to try and communicate to the resident humans that it needed help.

But how to help a creature who can only communicate psychically?

They set it free with the power of punk.

The sound waves break the ship free of the sediment and rocks it had been buried under and allowed the alien ship to leave. Rock and roll saves the day, and with a smashing guitar duet between Hattie and the Doctor. If only the comic came with sound… sigh…

All in all, a rockin’ ending to an awesome three-parter written by Doctor Who veteran writer, George Mann. And the art! Oh, the art! Amazing as ever.

And now, I bring to you the main cover and alternate covers. Let’s give these artists some love, shall we?

Cover A was designed by Simon Meyers. 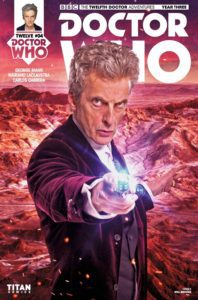 Cover B was designed by Will Brooks. 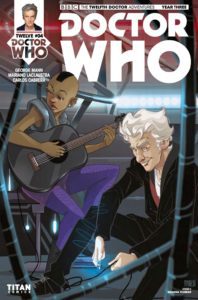 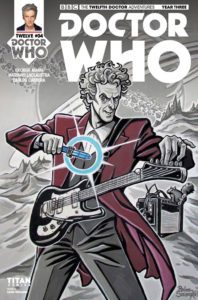 Cover D was designed by Raine Szramski (look at the clockwork squirrel!)