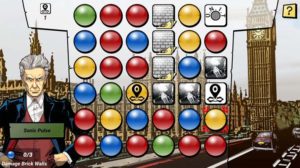 I’ve written about the game in it’s early stages. I’ve interviewed the lovely couple behind the game, Lee and Susan Cummings. Now? I bring you my opinion on the game itself! The art! The story! The sound! The gameplay! All this will be revealed!

If anyone knows about their previous Doctor Who themed mobile game “Doctor Who Legacy,” then you’ll have a decent understanding about how the gameplay works. It’s another gem based game, with an extra touch, making the player strategize even further than before. On the board you’ll have to battle Dalek gems, protect character gems, deploy character gems, etc. In the tutorial, which will be the first thing the player is exposed to, the player learns to power up special attacks, and how to utilize/protect the character gems. It’s an interesting tactic in a gem game, and it’s, dare I say, revolutionary?

The illustrations and coloring is magnificent as well, certainly reflecting the comic theming of the game itself. I quite like the brush-stroke look of much of the coloring. It adds depth, and reflects some of the coloring one would find in a comic book. 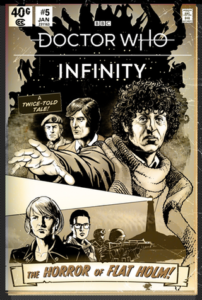 The story writes the characters very well, and with the narration by a varying cast (Michelle Gomez starts you off), you will have no problem becoming immersed, and feeling you are taking part in a Doctor Who adventure, where you star as the director!

The sound? Where do I start?! The voice-overs are amazing, of course, and the music is just absolutely gorgeous! It sounds like it was pulled straight from the series itself. (A soundtrack cd would be awesome in the future *cough cough*).

The stories that are available right now star the Twelfth Doctor, the Third Doctor, and the Tenth Doctor, respectively. The next story will star the Fourth Doctor.

Have you seen this:
Doctor Who - The Ninth Doctor Adventures: Respond To All Calls (Review Video)