Doctor Who Twelfth Doctor Year Three #5: The Wolves of Winter 1 of 3 (REVIEW) 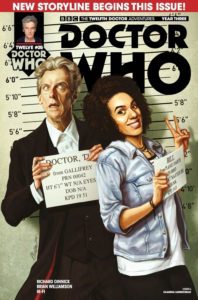 Doctor Who Twelfth Doctor Year Three #5: The Wolves of Winter Part One of Three
Titan Comics

No, I’m not trying to meet a specific word count (although that’s probably not a bad method), I’m just excited for Bill Pott’s comic debut!

Don’t worry, there shall be no spoilers here regarding Bill or the Doctor in this article, as I myself am behind in the current season/series.

Have some tea… and a cookie… and a nice blanket. 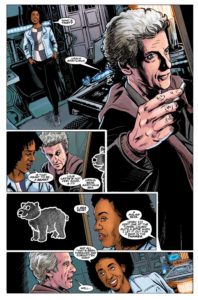 The Doctor and Bill land in the midst of some frightened – well, they hid that, but they were – Vikings, to which the Doctor mumbled: “Vikings, again?” Yes, my friends, he has had some history with these fellows, like with his first self in the episode “The Time Meddler,” which introduced a fellow Time Lord. To be fair, this scene did harken back to that old episode with Bill remarking about their horned helmets (which these Vikings had none). The Doctor remarked how his companions always talk about the horns. This is paralleling the scene with a prior companion Stephen Taylor, who remarked about the Viking helmet they found, thinking that it maybe was one, to which the Doctor snarkily replied (and one of my favorite lines, I might add). “What do you think this is then? A space helmet for a cow?” I love it. But that’s not the only jab at Classic Who, oh no! Bill was clad in the Second Doctor’s very furry, oversized coat. What an Easter egg that is!

Again, it doesn’t stop there, as the two of them face off against the Ice Warriors! Oh, wait, sorry…

However, we are left with a cliffhanger as to why the Ice Warriors are here, who these Vikings are, and what is the treasure the Vikings are dying to protect?

All that and more (I hope) in “The Wolves of Winter Part Two!”

The art is fabulous. Bill’s facial expressions are straight from Pearl Mackie herself, and the same could be said for the Twelfth Doctor. Speaking of art, which you know I like to do here, let’s do another round of showing off the variant covers! Let’s give these artists some credit!

The following covers were done by Claudia Ianniciello (A), Will Brooks (B), Blair Shedd (C), and Andy Walker (D), respectively. 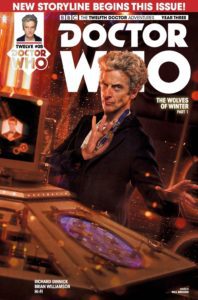 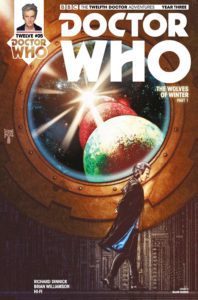 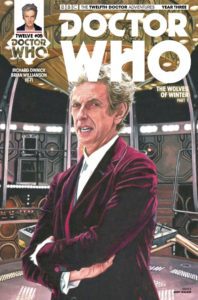