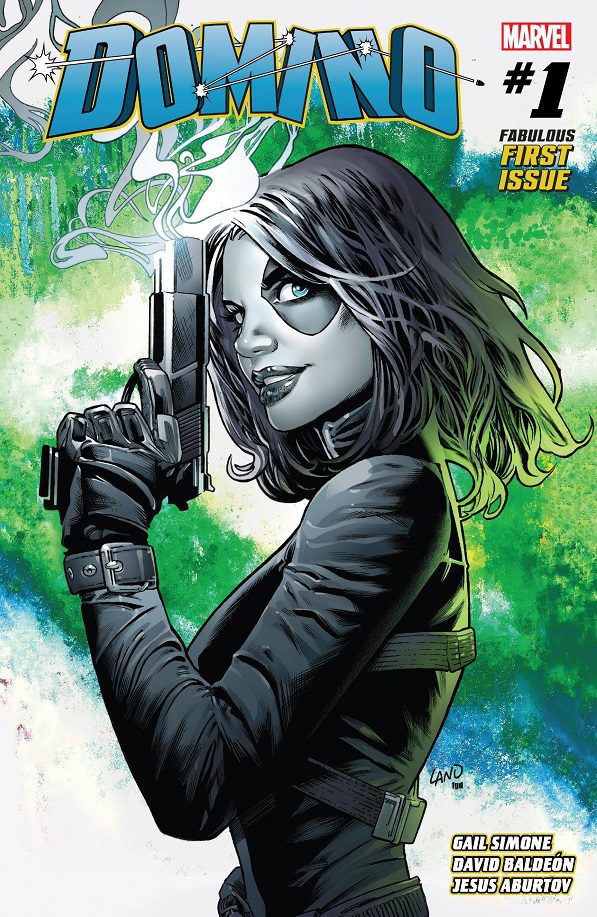 Domino has her own comic series.

I was elated to hear this news back in January, but now with the comic in hand, I felt that childlike excitement and nostalgia at the idea of lounging on the couch, legs crossed with tea at my flank, knowing that I’d be enjoying a good read. That is a rare, difficult to replicate feeling. But I digress. Domino #1 is an introduction to a new mercenary story featuring Neena Thurman and two other lady gun-for-hires, in which Domino’s luck may have finally caught up with her.

If I’m being 100% honest (and I’ve read lots of X-Men, X-Force, etc.) This is the best characterization I’ve read of Domino, yet. While she hasn’t been exactly stoic in the past, there is now a richness and amiability in her personality that makes her that much more relatable in this new run. I imagine her companionship with Outlaw and Diamondback (yes, she’s a pleasant surprise!) has a great deal to do with her expression, not to mention the birthday party. It grants us new angles on a character that we usually see confined to the middle of a mission. Plus, we’ve got a range of reaction as well as interpersonal insight through her narration, which is something that we usually don’t get outside of a personal series.

Maybe I’m a sucker for any iota of a “slice-of-life” comic, but that’s what this is for Domino. While not being a traditional everyday story, it’s her everyday story and that’s what makes it so fun. “Another day, another mission. Oh, it’s my Birthday! I love these guys.”  These are the threads that help you connect to characters and really love them. It’s not the plot. This matters of course, but first we have to care about the protagonist. I already cared before this, and I’ve been craving more of a focus on Domino for years, but Gail Simone really provides that window into Neena’s life that allows to understand and relate to her unlike we have ever been able to before. She tends to do that with her characters. That’s why I know I’m going to like this run going forward.

Then, I can’t compliment that we get this, vibrant, vivacious pencil work that packs expression into every panel, without making the mistake of overdoing it. And then the inks and colors!

I can’t even begin to tell you what a treasure it is to have David Baldeon drawing this book! I absolutely love his work. Not only do we get “a picture is worth over 9000 words” expressions, we also get monstrous monsters and meticulous background work. The application of thick inks only strengthens the effect of his masterful craftsmanship that much further. And like I said, Aburtov’s colors do wonders for bringing life to every page. Notice some of the grainy texturing? Beautiful. The cover features Greg Land and Frank D’Armata, whose work I’ve admired in the past, especially for detailed feature poses like this one.

We can tell already, from the headaches to the flashbacks, to the final scene (which I won’t spoil here because you need to read this!) that we are gearing up for work of art that explores not only Neena as a mercenary, but as a woman, and mutant with the unpredictably useful and sometimes annoying power of good luck. But this issue makes you wonder… has that luck finally run out? That seems to be the theme, and if you want to find out exactly why? Read the book.

Honestly, we are looking at a powerhouse team here that is pulling no punches on the quality of this book, and with a single issue, the precedent is set. I’m impressed, and of course, Gail Simone did not disappoint. I’m glad to have this on my pull list and I’m telling you here and now, If you do not add this to yours, then you are missing out. Get this comic!