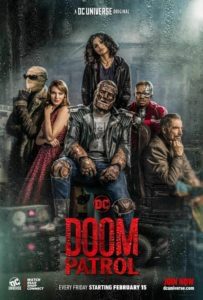 After the disappearance of Crazy Jane and The Chief, Cliff teams up with Cyborg, aka Victor Stone, to figure out where they went. Meanwhile, Rita and Larry do their best to distance themselves from what is happening around them.

“Donkey Patrol” is an excellent entry into the ‘Doom Patrol’ universe, with Cyborg and Negative Man being the highlights of this episode. Writers Soshana Sachi and Neil T. Reynolds finally figured out how to make the perfect Cyborg: a fun-loving athlete with a tragic past and guilt in his heart. Cyborg isn’t supposed to be a mopey drama queen like he is in other adaptations; in the comics, Vic still retains his personality from before the accident, except now there is still the added weight of being half-machine. In previous adaptations, we’ve seen him ditch his personality after he becomes Cyborg and turn into a whole new person.

Now, we get to see both sides of him and it is perfectly done. Joivan Wade delivered a stellar performance and fits in well alongside Timothy Dalton, Brendan Fraser, and Diane Guerrero. We finally got to see a little more of how Larry’s powers work, and it was done in a spectacularly hilarious and weird way. Crazy Jane’s personalities were delved into a lot more here, and provided an interesting look into the super-powered psyche, something we haven’t seen a lot of before. Guerrero was phenomenal, able to switch into tons of different characters and show something unique and different with every single one of them. Centering this episode around a donkey that is a portal to another universe was a genius idea that really embraced the weirdness of the comics and I absolutely loved it.

Overall, episode two of ‘Doom Patrol’ was a great dive into what made some of these characters tick, as well as embracing the quirkiness of the shows comic book routes.