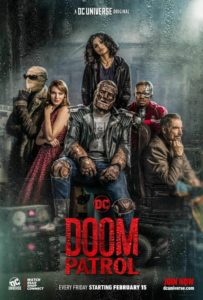 After the Doom Patrol discover where Mr. Nobody originally came from, they journey to Paraguay as their search for The Chief continues.

Each episode of ‘Doom Patrol’ continues to be better (and weirder) than the last and I don’t think that trend is going away anytime soon. The road trip montage, while a common trope, was surprisingly great due to the wacky personalities of the different characters. Everyone had at least one saddening scene in this episode, but Larry’s was by far the most heartbreaking. Seeing how he pushed away all the people around him before he was even before he was a danger to them made his story all the more painful. His interactions with the Negative Spirit showed just how much it’s broken him mentally. If every character in this show is developed like Cliff and Larry have been, we’re in for a really emotionally draining ride and I couldn’t be more excited.

Like the previous episodes, the editing and cinematography were great. Robotman and Crazy Jane’ fight sequences has fantastic choreography and were incredibly well executed. The VFX was good as well, especially with the character who appeared at the end of the episode. I did not expect him to look at all as good as he did.