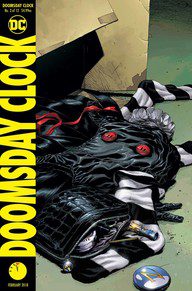 The rise of costumed heroes naturally calls for a rise in costumed villains to oppose them and this is illustrated in the first few pages of the second part of Doomsday Clock. As Veidt continues to work on Archimedes along with Rorschach, their newest partners get back into their work clothes. Marionette and Mime’s final crime is shown as Dr. Manhattan appears to stop them and something stops John from destroying them on the spot. A moment of hesitation that Veidt is hoping to use to his advantage to bring Manhattan back.

As the four of them contemplate what to do next, a new threat comes streaking through the sky. The ship barely makes the jump it needs to before something catastrophic happens around them. On another Earth, Bruce Wayne is taking a psychological exam and not taking it seriously. Something that Lucius Fox is extremely worried about. LexCorp is trying to take over Wayne Enterprises and if they do, Lucius is worried that the night-time activities that they engage in will be compromised. Public sentiment is turning against superheroes, especially Batman.

At the same time, the Archimedes blasts its way through and crash lands in an abandoned amusement park. Ozymandias decides to proceed with the next part of his plan. After securing Marionette and Mime, he and Rorschach make their way into Gotham City. Adrian decides that the best way for him to confront the differences on this Earth is to hit the local library first. He decides that he needs to secure help from one or both of the two smartest men in the world; Bruce Wayne or Lex Luthor.

Rorschach manages to break into Wayne Manor and finds something there that catches his particular interest. Adrian confronts Lex in his office and as the two of them talk, they are interrupted by a walking, talking ghost from Adrian’s past.

Things are really starting to get interesting in the second part of this story. Every reveal leads to new questions and Johns has done a great job of straddling both worlds without losing the narrative thread. While the Marionette and Mime storyline dominated much of the beginning of the issue, it never felt overdone. Instead, it looks like Johns is setting up something big for the pair coming up soon. Frank’s art is great to look at and the use of shadow enhances every panel. Another great chapter.

Have you seen this:
Batman The Imposter, Clear and more: The GWW Pull List