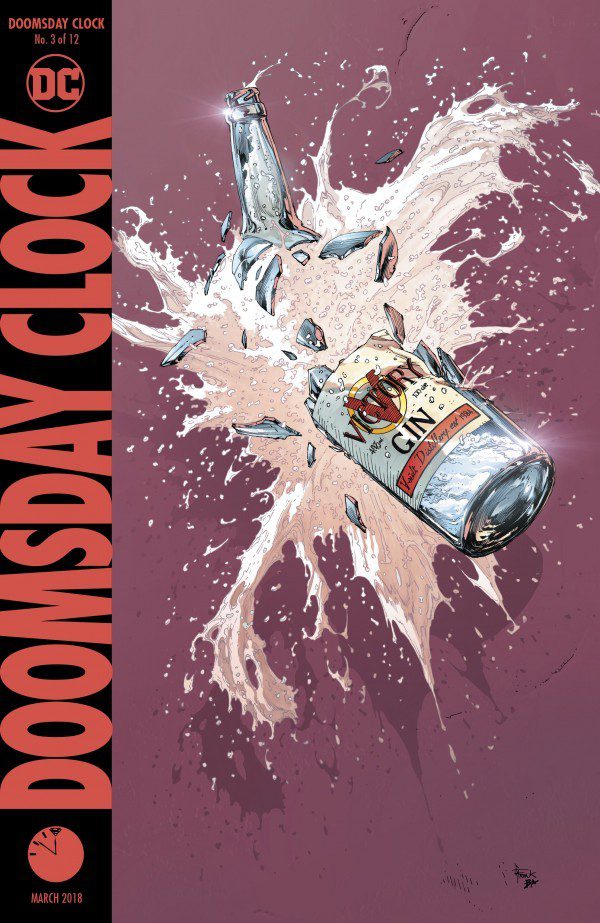 Anyone who remembers the opening scene of Watchmen recognizes what happened to The Comedian and, importantly, who did it. In Doomsday Clock #3, we get to see what happened after those events from the Comedian’s point of view. A battered Comedian finds himself in the water, fighting to get back to the surface and when he does, he sees a shiny city and as he reaches the beach and safety, a familiar face appears and calls him by name.

In Lex Luthor’s office, The Comedian and Ozymandias are engaged in part two of their fight but this time Blake isn’t half drunk and he holds his own to the point where Adrian has to make a strategic retreat before he’s killed. Meanwhile, Rorschach and Batman confront each other in the Cave and Rorschach attempts to explain to Bruce why he’s there. He hands Batman Kovac’s journal and implores him to read it. Marionette and Mime escape from their confinement and decide to check out the nightlife in Gotham and their presence and actions in a local bar are guaranteed to get the attention of Gotham’s more colorful characters.

As tension mounts on superheroes, specifically Batman in this world, the scene shifts to an older man in a nursing home and a film noir scene on the television that may or may not have significance to the rest of the story. Rorschach is shown to his room in the manor and we finally get to see who is under the mask. After taking a shower and falling asleep, we see the events in New York from his perspective before Bruce wakes him up to take him on a mission to find Dr. Manhattan.

The mysteries continue to deepen in this story and what is there is interesting and compelling. The beginning of this issue introduced some cool visuals and moved the story along really well, but the end opened up some more questions, including the significance of Screenland Secrets and the old man at the nursing home. I hope that these mysteries are fleshed out in the future because they seem to be set up to be important to the ongoing story and I want to know how they link to Manhattan.