When I watched Jojo Rabbit, I was disappointed at how tame its humor felt. Its satire of Nazis often went for a gentle nibble rather than biting with anger. That being said, I knew that this was by design from director Taika Waititi, who never leaves in doubt what he was trying to say. Downhill, on the other hand, has a much different problem. It begins as an amusing dark comedy, but eventually finds itself switching between the awkwardly maudlin and unbearably dour.

That’s not to say there aren’t merits to Downhill. The film’s exterior shots are absolutely gorgeous to look at, with Danny Cohen’s cinematography capturing the full majesty of Austria’s alps during the family’s ski trip. One can almost feel the cold atmosphere as the family skis down the slopes, the blinding intensity of a blizzard, or the full weight of what appears to be an oncoming avalanche.

Its principal players, by the way, are doing their darndest. When the avalanche happens, Julia Louis-Dreyfus looks believably terrified. The shock at realizing her husband abandoned her, which slowly shifts into indignation, is entirely believable. Also believable is Will Ferrell’s humanity. He committed a cowardly act in the heat of the moment when he abandoned his family, but is that truly who he is? Whatever the answer, he tries to deny that he even did anything wrong for the longest possible time. 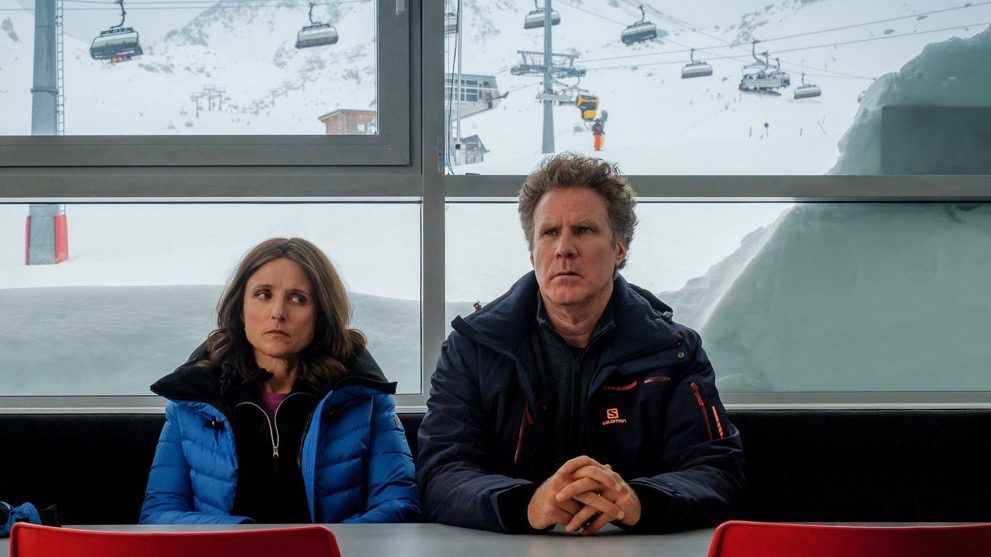 Ferrell covering up for or justifying his cowardice is the source of much of the film’s comedy. Whether he’s trying to awkwardly prolong an already uncomfortable dinner, frequently dancing around any conversation topic that may force him to face the consequences of his actions, or attempting to capture a whiff of his glory days in a drunken midlife crisis, the film does offer some genuinely funny bits of comedy.

Have you seen this:
COBRA KAI STAR XOLO MARIDUEÑA IS DC'S BLUE BEETLE

It’s what makes the unsatisfying third act all the more disappointing. Rather than trying to find a definitive statement on Louis-Dreyfus and Ferrell’s relationship, the movie throws up its hands and opts for a middle of the road approach. “We don’t know what we’re trying to say either!” It says. “You figure it out.”

Downhill is a remake of the Swedish film Force Majeure, a work which enjoys a very strong reputation. I have not seen it, but one review described it as “a precise film.” While some of the best remakes offer radical reinterpretations of a given work, perhaps Downhill would have done better to imitate that particular aspect of the original film.