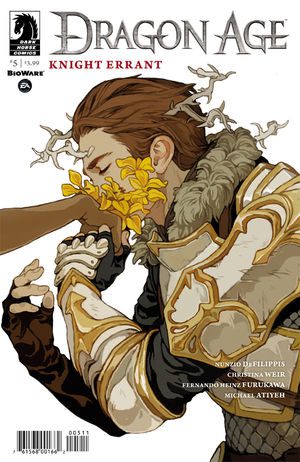 “All’s well that ends well.” If that is the case Dragon Age: Knight Errant is a good tale that ends very well.

“Life’s a journey, not a destination.” If that is true, then Dragon Age: Knight Errant is an unsatisfactory tale that goes on too long, even though it has a strong ending.

Writers Nunzio DeFilippis and Christina Weir finished out the limited series with a strong finale that provides resolution and unexpected character depth. While there were concerns with the middle of this story arc, DeFilippis and Weir have created two engaging characters with their Knight and Squire. Issue #5 is narrative and dialog heavy, but it succeeds in tying up the plot and setting the stage for future tales.

This limited series will read well as a collected edition, even with the weaker and bloated middle chapters. A strong start and rewarding conclusion make the series worthwhile. DA: Knight Errant was strongest when it allowed readers to live in the Dragon Age world and did not name drop locations and characters. DeFilippis and Weir find a balance in this final issue by sparsely using Varric and allowing Vaea and Aaron to stand on their own.

Vaea, the elf squire, and thief, developed into a complex character that ultimately could carry future stories in the Dragon Age universe. Vaea was depicted as more of a Robin Hood character than a traditional thief. But in this final issue, Vaea accepts a cause greater than her own. She may have started a job for the Inquisition to repay a debt, but by the end of the adventure, she grew willing to work for a greater good. This arc may be predictable, but the dialog between Vaea and Ser Aaron creates a sense of discovery and satisfaction.

In this final issue, those new characters shine brightly and create a strong justification for future tales. If readers fell away from the series over the past months, issue #5 is a worthy return to the Dragon Age lineage.