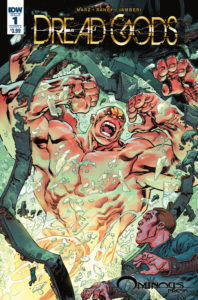 A community of mutants gather around and listen to the tales of the gods. Zeus and Hera lead the charge in battle against Hydra and Hades.

The series is pitched around the idea that this contemporary version of Greek gods will learn that they are only mere mutants. So as a reader I waited for that shoe to finally drop, but it never came. What we did get was a setup of how revered the gods are by the community of mutants. There is clearly a larger force at play here that has these mutants living a lie, and that mystery should be fun to figure out. 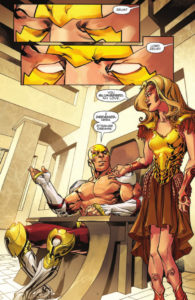 The characters themselves were a lot of fun, though knowing the premise of the story, a little naive. Each god transforms their body in some way for battle. Zeus grows a second set of arms, which brings me back to my Mortal Kombat playing days. They all exuded personality and it should be an interesting read when their world comes crashing down. There wasn’t much shown about the mutants outside of a wheelchair bound character named Carver.

I did enjoy the art quite a bit. Each character looked unique, and the action scenes were all great. The heroes could have easily looked generic, but the mutant vibe gives the gods a fresh look. The villains in particular looked cool. The Hydra looked like something you would want to see in the new Godzilla movie. There was subtle changes in how the art team made the world of the mutants looked, compared to the world of the gods.

This issue was all world-building, and it accomplished what it set out to do. Interesting new characters and a ton of great action made this fun read. But if I didn’t know what was coming, I don’t know if I’d be totally sold returning for the next chapter. There wasn’t enough there in the issue alone to grip me story wise. Fortunately, I have bought into the concept and I look forward to what’s next.