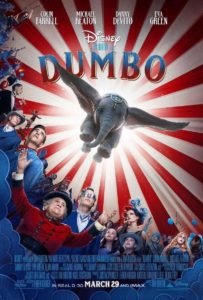 If I have ever watched the original “Dumbo,” I was probably still a little peanut in a onesie. Heh. See what I did there? Peanut? Dumbo? *Ahem* I digress…

As soon as the film started, the sound and presentation were distinctly Burton-esque. I started grinning as soon as the realistic Casey Jr. train appeared, and Danny Elfman’s rendition of the train’s theme was very theatrical, and set up the film as a more adult version of the 1941 animated classic; a film made for the children who grew up. A heartwarming tale of good versus evil, a family coming together, and how in life, courage and love are some of the best tools to have.

But is this what you’re here for? No. It’s to hear about the special features - and that’s nine features, to be precise, and I watched them all for you:

“Nico’s Journey”, 2 minutes, 21 seconds: This feature takes you behind the character of the young girl, Milly Farrier, by interviewing the actress Nico Parker on her role, and her time on set. It’s nice to hear this young girl’s journey. A very mature young girl, with an old soul.

“Built to Amaze”, 7 minutes, 40 seconds: This feature discusses how each scene was brought to life through the creation of elaborate sets, and minimal green screen. It really is amazing how much of the film were actual sets, and not just a green screen.

“Circus Spectaculars”, 8 minutes, 20 seconds: This feature dives into the world created on set, and how all the actors came together to create the tight-knit circus family we fall in love with. They really do become a family, and it’s heartwarming to see. 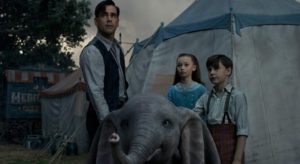 “Easter Eggs on Parade”, 3 minutes, 50 seconds: What it says on the tin. All the Dumbo Easter eggs included in the film. I thought they were rather obvious, but hey, that’s just me!

“The Elephant in the Room”, 5 minutes, 50 seconds: This feature goes behind the scenes, showing the actor who portrayed the lovable Dumbo on set for the actors to interact with. It’s incredible to see how this actor in various suits was able to convey the emotion of the elephant.

“Deleted Scenes”, 7 minutes, 57 seconds: Dare I say more? It’s a collection of scenes that were cut for time.

“Clowning Around Bloopers”, 1 minute, 57 seconds: Not too many bloopers were included, but you know me, I love me some bloopers!

“Dreamland - Anatomy of a Scene”, 3 minutes, 34 seconds: This feature goes behind the scenes on how Tim Burton got the chance to create his very own theme-park - which certainly reflects Disneyland/ WDW in certain areas. It’s like if Disneyland had the chance to create their Jules Verne inspired land as well as a Tim Burton inspired land. It’s marvelous! But you’ll have to watch this feature to see some of the really impressive stuff like the extras, where it was created, and how much practice it took for the parade scene!

“Baby Mine Performed by Arcade Fire”, 2 minutes, 59 seconds: Tim Burton made sure this song was included in the film, as it was sung by the Mermaid Lady in the circus. However, Arcade Fire did a cover of it (which is AMAZING!) and the music video is included on the DVD.

Well… that’s my review of “Dumbo” on Blu-Ray. I whole heartedly recommend you buy this, not just for the incredible movie, but for the special features, as it really makes you appreciate the film that much more.