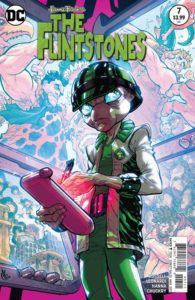 Ethnography is defined as the study and recording of human cultures. Mark Russell’s The Flintstones is recording modern culture in comic form. From the start of this series, Russell has not hesitated to lampoon corporate greed, organized religion, scientific faith, marriage, politics, war, mass media, and consumerism. Consistently Russell’s social critiques and satires have hit their mark. Although the second issue felt too one note, Russell has found a rhythm over the last four issues and is currently producing one of the easiest books to recommend to any reader.

Issue #7 uses Gazoo’s practice of ethnography as the narrative framing device. Gazoo documents the humans and their newly settled civilization. Bedrock, like the American culture it critiques, may be settled but it is not always civilized. Russell uses issue #7 to reflect back on some of the themes of the previous six issues and chastises the culture as hallow and empty. Gazoo describes the town of Bedrock as seeking meaning in material goods, finding that meaning shallow but turning to more goods to fill that void.

There are continued challenges to organized religion, but in this issue it is the followers who are 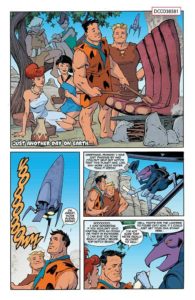 satirized. The religious leader stumbles in the equivalent of the historic Catholic Church practice of Indulgences. Paying to remove or forgive their bad deeds becomes a successful money making endeavor as believers are more eager to pay for their selfish impulses than they are to control them. Eventually it is the religious leader pushes back and chastises the “believers.” It is human nature that Russell takes to task, but it is also human nature where Russell shows glimmers of goodness. Fred disobeys Mr. Slate’s corporate greed to shut production down and puts himself in harm’s way to rescue a fellow worker.

Russell is not shy about critiquing both sides of any issue and the series is better for it. The book is still not as lean as it could be, but those moments are reduced to panels and not pages. At times there are reasons to hit readers over the head with the critique to make the point, rather than subtle satire. Throughout this series Russell has found a consistency here that makes The Flintstones essential reading.

Make a New Year’s Resolution to pick this title up. There are often practices and habits that readers what to change and Russell’s The Flintstones may be just the right reflection and recording of human culture to motivate that change.