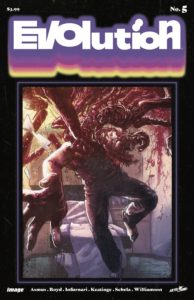 Abraham comes face to face with an infected human, Hannah and Juan continue their journey to Quedlinburg, and Claire and Rochelle discuss taking Hurwitz money.

I admit I wasn’t sure how much I should invest in the three revolving plots of Evolution. It’s hard enough to keep me interested in one story, but with this series you have to follow three groups of people with journeys that are only loosely connected. I have been pleasantly surprised with how well this is all working. I’m still hoping for things to come to a head sooner rather than later but the fleshing out of each individual character and their motivation has been superbly executed. This series is very generous to readers who have trouble remembering names, it helps that the focus remains on the same people each issue without introducing too many others. Since we are already seeing the end of the world as we know it through many sets of eyes, there is no need to drown us in supporting cast members. I appreciate how rhythmic each storyline is being told, it makes for a better reading experience and has me hooked on everything going on.

the artwork is fitting for a horror comic book such as this. Joe Infurnari and Jordan Boyd set such an unsettling mood that even normal humans who haven’t been infected yet look creepy. It’s not just the body horror either, but the tease of it alone can get to me. When the nun Hannah was on the train even just the scissors being anywhere near the infected body parts grossed me out. It made me wonder just how far Infurnari is going to go with some of these scenes. That snuff film from the previous issues was disturbing, to say the least. 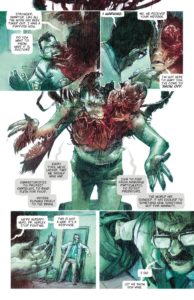 Of all the plots going on, I’m ready for Abraham’s to take the next step. It could get frustrating fast if the unhinged doctor can’t convince another human of what’s going on. He knows so much, and yet he’s really in no better spot than anyone else. Claire is walking into a buzz saw we are just slowly watching it happen. Rochelle has a confusing set of morals if she believes Hurwitz took part in a snuff film so strongly she should turn him in, if there is room for a misunderstanding then surely it’s worth it for her and Claire to clear things up. It looks like her fear to deal with him may be about the money, but her reasoning is off. Hannah has the most understated story so far but it looks like that’s about to change.

I wouldn’t wish a bi-weekly schedule on any comic creators, but I would give anything for quicker chapters of Evolution. It speaks to how good the series has been so far that I want more and judging by social media it has been one of the most underrated comics out each month. I feel like there are big things ahead and I’m excited to see where it goes.

Evolution Image Comics
Are you an Insider?News, reviews, & updates are just the beginning.