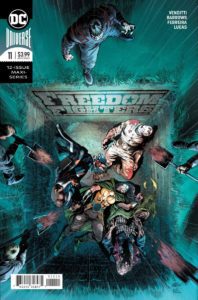 Robert Venditti and Eddy Barrows have made punching Nazis fun again by bringing the best of the Freedom Fighters back to comics with a team that does the stars and stripes proud when putting boot to SS backside. Earth X has always been an interesting parallel universe in the DC canon, a universe where the Axis powers won WWII and allied icons like Uncle Sam and his team of superheroes are the resistance. But as this series is now winding down it’s time to see who is left standing at dawn’s early light.

The final battle for the fate of Earth-X has begun, and the last charge of the Freedom Fighters is underway! The team may have bested the defenses of the Nazi stronghold of Cheyenne Mountain, but now our heroes must face off against the combined might of the newly reconstructed Cyborg Overman, the evil Plasstic Men, and the psychotic Hitler III! The odds are against the red, white, and blue, but Uncle Sam has a plan-don’t miss this penultimate issue in the Freedom Fighters saga!

Click here to get your copy at Comixology! Do your part to support the comics industry and stop piracy. Every sale supports creators and a small percentage of every sale helps support this site.