EXCLUSIVE: Here’s What Was Originally Planned For The ‘TITANS’ Pilot

DC Universe’s first live-action original series ‘Titans’ debuted a few weeks ago to a warm response from fans and critics alike, but what was shown in the pilot was a lot different than what was originally planned.

First off: the structuring. Originally the intro would have been the Haley’s Circus flashback but Raven wouldn’t have been watching. Dick was supposed to have more dialogue with his parents and he would have seen a man in the rafters of the tent right before they fell. Then Raven woke up and it played exactly like the episode did until the intro. Each character has a separate section of the episode too, starting with…

No gloomy Detroit in the original plans, the show was originally supposed to take place in warm sunny San Francisco! We still see Dick watching the criminals leave the building and looking at their file, a black case sitting next to him, but it’s a much different setting than what we saw in the actual episode. Then we see Dick go to investigate a robbery at a liquor store (It was obvious to Dick that it was insurance fraud). He goes back to his precinct where he meets his new partner, Detective Amy Rohrbach, whom he blows off. Dick walks off and the rest of the cops tell Amy that he is from Gotham and likes to work alone. They invite her to the break room for another cop’s birthday party.

One officer tells Amy that Dick showing up is just an act, that he’ll drink half his beer and disappear. Dick does exactly this and Amy watches his leave. He goes back to the building he was at earlier, glances at the case and back at the criminal leaving the building. He opens it, revealing the Robin suit. He looks at like an old friend he hasn’t seen in many years, touching the R on the suit. He proceeds to the alley like in the episode, just without any ‘Fuck Batman’ lines. Robin threatens the leader before disappearing right as the cops arrive. He hides on a rooftop as it starts raining and washes the blood off his fists.

The Raven part of the episode plays out the exact same way as the actual show, little to no differences except a few more scenes took place at Rachel’s high school and the fact that her hometown is Eugene, California. At the school, she slips back into dreamworld during class, where she flashes back to Haley’s Circus before her teacher wakes her up. From there it continues the way we saw it in the episode, with Rachel buying a bus ticket to San Francisco.

Back to Dick, in his apartment scrubbing gunpowder off his costume with a toothbrush. He takes a shower, grabs his badge and gun, and exits his apartment building. He catches something out of the corner of his eye, only to see the shadow of Batman looming over him, but when he turns around it’s only his shadow, deformed by pipes and hanging laundry. Dick receives a phone call, then he’s at the alley where he fought the thugs the night before. The cops tell him it was Robin, wondering why he’s in San Francisco. Dick accidentally cracks a joke about how it could be the weather. Dick heads back to his car where he runs into Amy. She offers him a cup of coffee, but he rudely blows her off. Amy throws it in the trash. 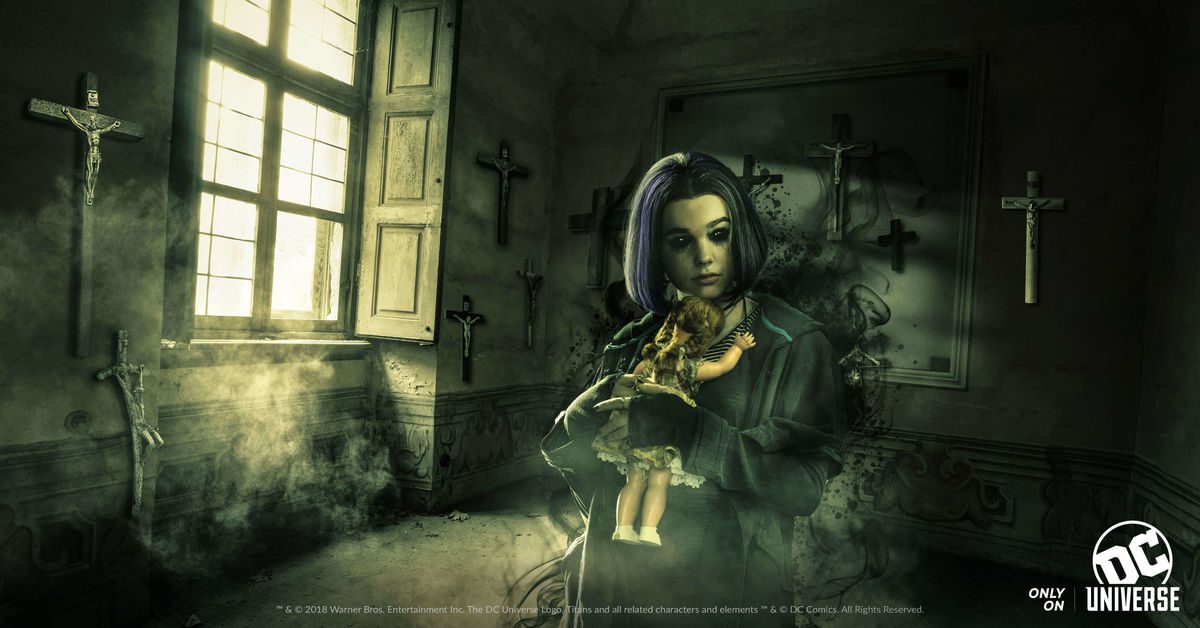 Back at the bus ticket booth in Eugene, the Acolyte slams a picture of Rachel down on the counter.

Now at the bus station in SF, Rachel sits in the doorway crying, watching homeless people make their way to a soup kitchen; she follows. Then the creepy woman offers her help, leads her to an alley, and then Rachel realizes it’s a trap. She runs and throws a brick at a cop car, which prompts them to arrest her, escaping the Acolyte’s servants.

Back at the police station Dick starts to warm up to Amy and they share some banter. Dick gets called into the interrogation room, where Rachel is sitting. She immediately recognizes him from her dreams, says she knows he’s the boy from the circus and asks for his help.

No differences from the actual episode except for Kory’s clothes realistically burning off when she torches Konstantin and his men.

Back at the SF police station, everything happens the same until The Acolyte wants into the room where Rachel is being held. Dick is gone, off with Amy. It is implied that the Acolyte has connections everywhere. Dick gets a call from the Eugene PD, they did indeed find Rachel’s mom dead. Dick runs back inside the building, but Rachel is gone.

SPOILERS!!! for future episodes are in this paragraph and this paragraph only, read at your own risk. There are flashbacks to Dick in the interrogation room and Starfire in the club, and now a shot of the woods, a low animal growl, then darkness. A Raven then flies straight at the camera, screeching hideously, but the strangest part are its eyes: there are six of them, glowing red.

Rachel is in a black suburban with the Acolyte as Dick watches it drive away. He spots a motorcycle, steals it, and speeds after the suburban. Rachel screams inside of it, causing the Acolyte to crash. Dick rushes to get Rachel out, but its too late. The Acolyte is holding Rachel and has a gun pointed at Dick. Dick tries to coax her over but the Acolyte taunts her about the death of her mother. In a burst of anger, a dark apparition of a giant raven exits her body and swallows the Acolyte, savagely killing him. Rachel begins to cry, Dick looking at her the same way Bruce Wayne once looked at him. He puts his hand on her shoulder.

Back the police station, Amy walks over to Dick’s desk with two cups of coffee, but it’s vacant. Amy asks where he went, but no one knows.

Dick and Rachel are in the garage with Porsche. Rachel stares in awe, Dick tells her it’s a gift from another life. She asks if she can drive, but he says no.

Then they’re driving. Rachel looks out at the ocean and asks if people are going to keep coming after her, he tells her they will but that they’re going somewhere safe. The cheesy ‘monster’ line is present too.

Back at the Roth home, police are all over the place, and a crowd has gathered outside. Kory is among them.

At a Big Box warehouse, a security guard is playing basketball. It bounces the wrong direction and knocks a box full of glass down. It shatters but he just sweeps it to the side. He’s about to go back to playing when he hears a loud noise. Peering around one of the aisles, he sees a giant green tiger! The tiger is digging through a box of video games and roars at the security guard, who fires his gun but misses. With a bag full of video games in his jaws, the tiger races at the guard. Moments later, he’s in the woods.

The tiger turns back into a Gar Logan, described as a slightly feral modern-day Eddie Munster. Gar looks in the bag checking out his haul. “Rad,” he says, and the episode ends.

What do you think of these changes? Do you prefer what we saw or would you have rather seen this? Let us know in the comments!