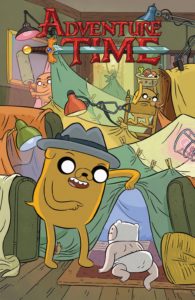 Here I am, once again, finding myself in the Land of Ooo…or am I? We’re in space! And there’s the Earth with the giant chunk taken out from it, surrounded by - wait, who are those giants? Who’s this new character wearing a Finn-esque hat with an animal side-kick? Is that Finn?!

Oh, wait, no, Finn’s over there, elderly, and talking about a cool sword - would he be talking about anything else? Evidently, Finn’s been living on the the moon since those destructive giants have taken over the world, and is there to assist this new character, Penelope, with her Tigercorn (did a Tiger mate with a Rainicorn?). Receiving wisdom from some otherworldly beings, Finn built an amplification device to increase the power of that aforementioned cool sword, choosing Penelope - because she was the first to come to the moon in years and he was tired of being there - to be the one to rid the Earth of those beings. Penelope succeeds, and we are then transported to a desolate, bland, Candy Kingdom with Princess Bubblegum’s castle appearing rather decrepit in the background.

However, here is where we see the connection between Penelope and Finn. Penelope is Finn, just him reincarnated in the future. To set things right, they create a portal from primordial ooze, and destroy that totally rad sword, which transports both characters to their respective points in time: Penelope on a prior mission, and a young Finn ceremonially cutting Jake’s sandwiches for all of the Candy Kingdom. 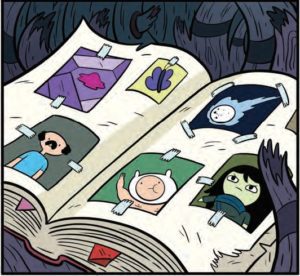 As Finn says in the comic, “…there’s an occassional hiccup in Ooo, but for the most part…The fun never ends!”

This was the writer’s last Adventure Time Comic, and that last line seemed a fitting farewell. Sure, there may be paradoxical mishaps, the Lich changing the timeline, or just monsters roaming Ooo, but the whimsy and randomness of Ooo will never end, as the next writer will take the mantle and write more adventures, and so on, and so forth.

Now this comic is a linear story told about Finn and a future form of himself, inline the other Adventure Time comics by kaboom! which showcase various tales centered around various characters. With that said, the cartooning style in this issue mirrored the style of the television program - which is rad man! Totally mathematical!

Sorry, my inner Finn came out. If you’re not accustomed to the randomness of Adventure Time, then this comic will certainly confuse you, but if you’re a long standing fan like myself, this comic is another delightfully whimsical tale starring our favorite radical adventurer.