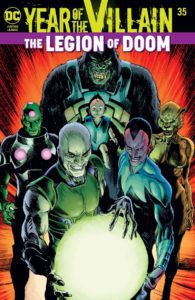 It’s called the “Year of the Villain” for a reason— in this issue, Lex Luthor wins! Everything Lex has been working for over the past year and a half comes to fruition as he finally possesses the fully powered Totality and plans to bend Hypertime to his will. The Legion of Doom’s leader will defeat the Justice League once and for all and make his final pitch to serve at Perpetua’s side-and the Multiverse will never be the same! Francis Manapul returns to Justice League for a key issue on the path to Year of the Villain: Hell Arisen—and beyond!