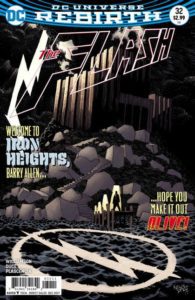 Barry is working with Wally to master his control over the negative speed force. As they take down a group of super-powered 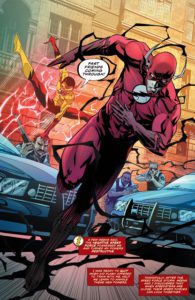 jewel thieves, the duo speeds off and has a discussion about Robin kicking Wally off the Teen Titans and what happened between Barry and Iris in the future. Neither one of them seems to want to share, so they go their separate ways. Barry is running late to his new job at Iron Heights prison. Both Barry and his reluctant partner Kristen enter the prison and are met by the warden, who has his own ways of disciplining the prisoners.

As Kristen remarks on the brutality on display. Barry has a different reaction than his partner to it and the harsh methods of quelling it. As Kristen gets more and more upset at what she’s witnessing, some of the inmates including Godspeed and Captain Cold recognize Barry and wonder why he’s there. As Barry gets used to his new surroundings, a new threat emerges on the outskirts of the city and another speedster makes a return to Central City.

I like seeing Barry in a new light. Williamson has taken him from familiar surroundings and into an area where both Barry and the Flash are hated. It will be interesting to see how Flash manages to be the hero while trying to navigate his way out of the prison and its constant surveillance.