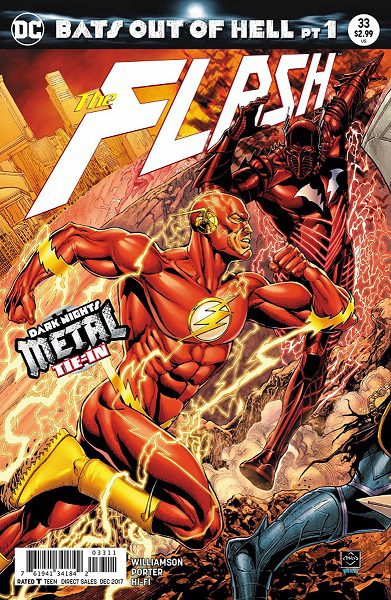 “Bats Out of Hell Part One”

With Metal in full swing throughout the DC universe, this issue of the Flash ties directly into that storyline as Barry takes the fight to The Dark Knights. It’s been a week since Challenger’s Mountain appeared in Gotham and the Dark Knights have descended on cities across the country. Barry is racing with Superman to get him through a barrier in the Phantom Zone that might lead him to Batman. In the meantime, Barry wonders what’s happening to Iris and Wally in Central City as the rest of the League is scattered trying to find a way to stop Barbatos and his army of twisted Batmen. Steel and Barry resist the urge to study the cosmic tuning fork that Batman has been keeping under the Fortress of Solitude as Barry tries to contact the rest of the league.

As they continue to search for Nth Metal across space, Cyborg tries to warn them about a threat, but it’s too late. The Murder Machine and the Devastator emerge to retrieve the tuning fork after taking out Steel. Barry enters a Boom Tube and emerges in a Central City devastated by chaos and destruction. He finds Iris and Wally, both old and brittle before he’s thrown into darkness surrounded by his friends. As they communicate with each other, another voice intervenes and gives Barry an ominous message about what’s coming next. 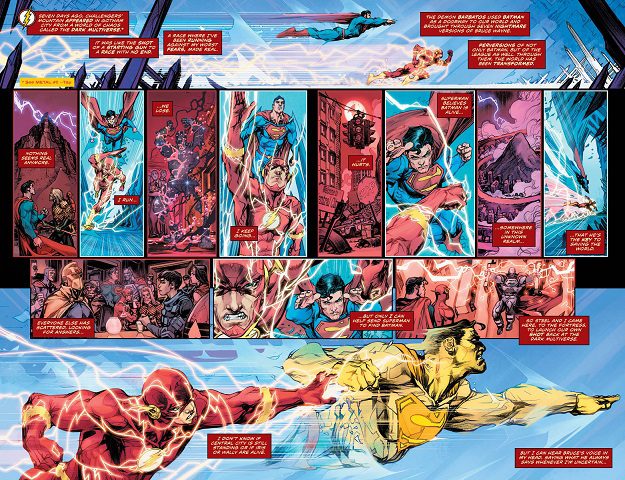 Barry is at his best when he is embracing his role as a hero and Williamson has done a really good job of taking Barry to the edge in this issue. Barry’s internal monologue is well written and gives some great character motivation and I really enjoyed how the story managed to draw in the rest of the League without taking anything away from Barry as the focus of the issue. Porter’s art is well done as well with some great splash pages and action-packed panels. Can’t wait to see Barry take on The Red Death one on one.

Have you seen this:
Shovel Knight Pocket Dungeon (REVIEW)