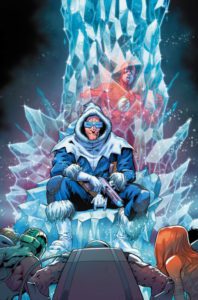 One of the best changes that I have noticed in the DC Rebirth version of Barry Allen is that there is an emphasis on his being a detective. Those skills come into play as Barry remembers moments in his past where he had to use those skills and how much he enjoys a mystery. His passion for mysteries is going to be needed as he makes his way into Iron Heights Prison to deal with the latest one to land on his doorstep; the murder of an inmate.

As Barry and Kristen get ready to investigate the scene and more specifically, how the inmate got out in the first place, they are waved off by Singh. Barry’s new duties are about preserving the scene until the CSI’s arrive. A prospect that Barry does not take kindly too, especially since he knows the victim. As Singh and Warden Wolfe argue about the scene, the roles of Bary and Kristen at it and why they are there, The Trickster decides to attept to escape from Iron Heights after claiming responsibility.

After Trickster is subdued, Barry runs into Godspeed. The villain begins to act like the police detective that he once was and it infuriates Barry. The two go back and forth about both the crime and Godspeed’s actions before they are broken up. Meanwhile, in the city, two sets of Rogues are attempting to rob the same bank. A situation that gives Barry the perfect opportunity to blow off some steam. As he and Kid Flash spring into action, the benefactors of the two rogue teams meet and decide that it would be better for business if they started working together. A prospect that the newly appointed “king of crime” in Central City agrees with as he reveals his plans and makes a new ally.

Williamson has done a great job of expanding on and compounding the difficulties that Barry is going to face in his new role. As more of his life as Barry Allen becomes complicated, his retreating into The Flash becomes not only easier but more complicated in and of itself. Porter’s art is dynamic in this issue and he continues to use great panel angles to denote movement, especially the kinetic nature of Barry’s new life. Worth a read.

Have you seen this:
Change My Mind #93: MCU Rewatch Vault - Captain America: The Winter Soldier