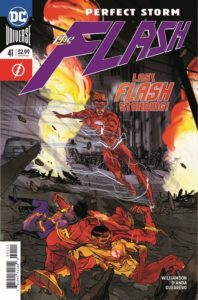 As Barry makes peace with what’s happened, the other Wally appears after doing recon on the entire city. He seems to know what Grodd is waiting on, but Barry tells him that what the city needs is for Wally to be the Flash. Avery gives them the low down on what to expect if Grodd succeeds and Barry tasks Avery and young Wally to leave the city. Older Wally is given a mission to evacuate the city. Unfortunately, Barry’s obsession with getting his powers back might be the opening Grodd needs to complete his plan and Wally’s distraction at finding Iris frozen opens him up to a trap by Multiplex. Kid Flash and Avery decide to ignore Barry’s orders and go after Meena. 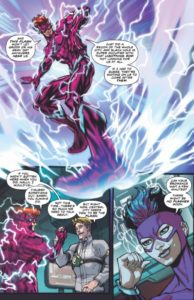 Have you seen this:
Change My Mind #83: Multiverse Madness!

As Wally rescues the citizens of Central City, he reflects on the time he was gone and wonders about the people who remember him. At the same time, Barry makes a deal with the devil to help the city. One that might cost him more than realizes.

The pacing of this issue is some of the best I’ve read in a long time. There is a desperate energy to the story and the visuals that match perfectly. I really enjoyed the team dynamic with Wally and Avery and it was good to see older Wally make some positive turns in his life. The only thing I didn’t like was Barry in this issue. I know that he is desperate to get his powers back, but there are moments when he seems to have forgotten every lesson that he’s learned so far in this run. His regression in character development makes for some unnecessary issues for the team that could be handled if he trusted them more.