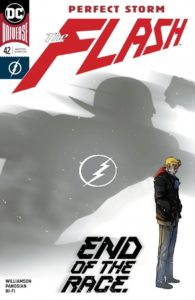 Wally West is taking on his new role as The Flash of Central City as everyone remains frozen in place and Barry Allen works on how to get his powers back.

Grodd begins to question where this new Flash came from and how he seems to be so experienced. It’s a question that he continues to contemplate as Meena tries to convince him to turn his mind back to retrieving the lightning wand so that he can control the speed force storm. A task he needs to do quickly because his illness is getting worse. Unfortunately, Wally’s need to find Iris could do more harm than good.

Barry and Godspeed continue to work on a plan to get the wand back to where Barry lost his powers. Godspeed explains to Barry that his actions are sounding familiar. 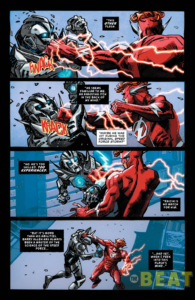 Something the former Flash does not want to contemplate as he begins to get ready to execute his plan to get his powers back. At the same time, Kid Flash and Avery manage to isolate Meena and try to reason with her. When Wally arrives, all hell breaks loose as Barry’s plan goes into effect, Grodd’s forces move in and a miscalculation could give Grodd exactly what he wants most.

I like how the tension is building in this issue and this arc. Williamson seems to be building to something interesting and I really hope that the momentum continues without losing too much character growth from Barry. There is something interesting about exploring Barry’s relation to the speed force and his obsession with regaining his powers. The art is well done as well, with some interesting retro details that worked really well for this story.