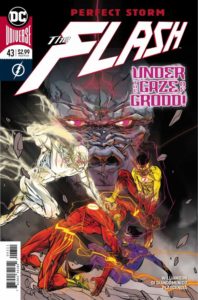 Barry Allen has gotten his powers back and that’s made everything worse for him as he finds himself being chased by his friends and family through the streets of a still-frozen Central City.

As he tries to make his way through the city, scientist Barry takes over and begins to fill his head with information in an attempt to keep Grodd out. As Grodd continues to hound Barry’s mind, he sends the rest of the Flash family after him in an attempt to force him to fight. As they surround him, Grodd continues to try and push Barry to fight back, but the Flash refuses to fight his family, even Godspeed. As Barry and Wally go toe to toe, the former Kid Flash is taken back to the memories of his youth as he makes some pretty jarring points about Barry’s need to be in control. In a moment of understanding, Barry is breaking through enough to learn more about Grodd’s plan and what he wants from the speedster. 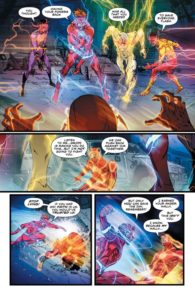 For all his bluster, Grodd does have a point. Barry’s need to regain his powers has led him to make a questionable alliance with Godspeed, forced Wally into a situation he wasn’t ready for and put both Avery and Kid Flash in mortal danger. It’s those acts that Gross continues to exploit as he finds Barry and has him surrounded. Barry and Grodd battle it out across the city and Barry makes a decision to take a risk that could both stop the threat of Grodd or give him even more power.

It’s a testament that Barry does everything he can to do the right thing. It is a great mainstay of the character to give Barry that kind of pathos and it works in this issue. The narrative works well and the moments between Barry and Grodd stand out as the art keeps everything moving at a frenetic pace that I appreciate visually.