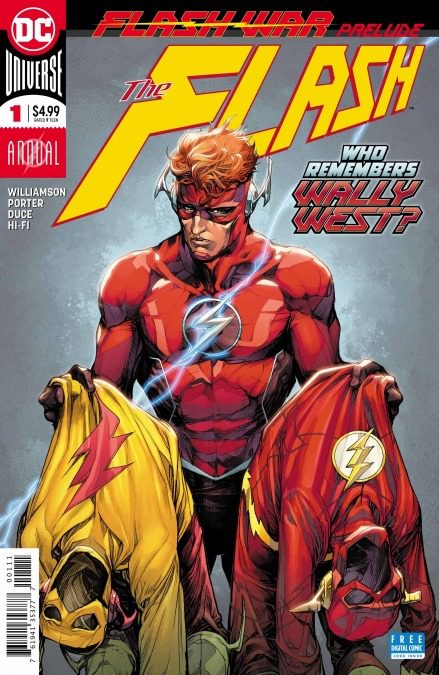 In the 25th century, The Flash Museum is destroyed and forensic investigators are on the scene trying to determine what happened. As they view the destruction and take their readings, the group picks up traces of Reverse Flash’s corpse in the air. A call back to a previous arc that brought Thawne back to terrorize Barry through Iris. As they talk about Thawne and tease a being Thawne locked up in Iron Heights, they find some new readings. Readings that lead to the bigger mystery that has been plaguing the Flash and his friends; Wally West.

In the present, The Top is attacking Central City and both Wally West and Titans Wally West are there to help along with Barry. After taking the villain down, Iris 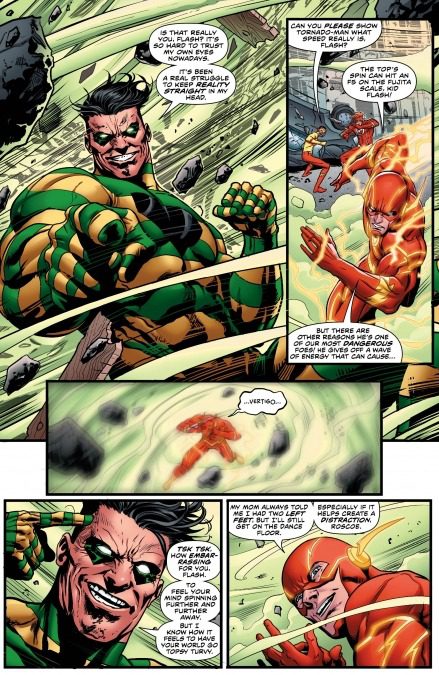 comes on the scene and wants to interview the new redheaded Flash. Wally gets spooked and runs off with Barry and Kid Flash on his tail. The three of them get something to eat and Barry tries to convince Wally that it’s time he told Iris who he really is. A prospect that Wally isn’t ready for and after finding out what Iris did to Thawne, he loses it and lashes out at Barry. He decides to try and rebuild his life, but the only people who remember him are the Titans and they’ve disbanded.

When Wally decides to try and find an old flame who remembers him from both his childhood and as Kid Flash, the reunion does not go as he planned. The memories she has brought on a manifestation of her powers and memories of her time as Rogue. A prospect that might be more trouble for Wally to deal with.

Wally’s return has been a plot thread I’ve wanted to see dealt with for some time. It’s been touched on in other books, but I like how Williamson deals with the reality of Wally’s presence in this world. Porter’s art is great and I really want to see where this goes, especially with Flash War.