Float On in Aquaman #16 REVIEW 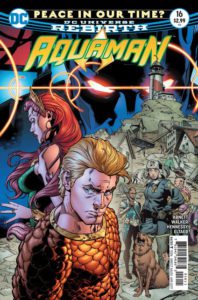 Aquaman and writer Dan Abnett just finished a strong five issue story arc involving a war between Atlantis and the United States. The aggressor in the conflict was neither nation though, a rogue organization, N.E.M.O., attacked both nations to create a war. As the Flash rightly noted during the story arc, N.E.M.O. must be the bad guys because they have an acronym. While the joke was funny, the tone of the conflict was serious and resulted in significant losses for both the US and Atlantis. During the conflict Aquaman was questioned as a leader and survived an assassination attempt by the US Military. Issue #16 occurs during the aftermath of the conflict and finds Aquaman helping the recovery efforts in his hometown of Amnesty Bay, MA.

After the high stakes drama of the previous story arc, returning to Amnesty Bay is framed as a way to reconnect Aquaman to humans on a personal level. This intent is understandable and is successful at allowing the characters to catch their breath during the relief efforts, but it also is a missed opportunity to address the scope and scale of the previous conflict. After a conflict that threatened the stability of Atlantis, having Aquaman, Mera, and his inner circle cleaning up a small town reduces the scale of the threat from the previous arc. Upcoming issues may still find ways to address the lasting impacts of the conflict, but this issue moves readers along to the plot line. 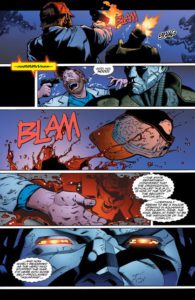 The issue successfully bridges the previous story arc to the next one and introduces the villain of the next arc. Abnett cuts between some personal interactions with Aquaman and the new, foreboding threat. Abnett’s narrative is functional and portrays Aquaman’s human side even as human characters close to him realize his power and responsibility as king of Atlantis. The new threat comes as Aquaman has earned respect and trust from the human public. The villain has telepathy powers and is seeking a way to control Aquaman, which may lead to the loss of that newly earned trust from humans.

Issue #16 serves its purpose of bridging story arcs and provides new and returning readers an easy place to jump on.  As a stand alone issue it is successful in reminding readers of Aquaman balance of power and responsibility with his connection to the human world. As an epilogue to the last arc, it is narrow and does not answer a number of questions surrounding the fallout of the conflict.

A fine life raft for readers to jump on, but a safe local story in what could have been an exciting world building opportunity.  Issue #16 floats safely on.