Never have I felt more enjoyment than when I attended my first comic con. It was August 14, 2014 and my girlfriend at the time, currently my wife, suggested we do something fun. She knew that I loved comic books and action figures, so she found out that there was a comic con in Boston. We saved up a little money, but I wasn’t prepared for my first comic con. I had bought a ticket to have a meet and greet with Manu Bennett who plays Deathstroke on TV’s Arrow. We get to the venue at the Seaport World Trade Center in Boston and the line was the longest line I have ever stood in in my entire life. It took two and a half hours to get into the building. I only had half a bottle of Sprite and I was trying to conserve it. We got in and it was about an hour before Manu’s meet and greet at 10:30am. He was very cordial and offered my wife a free selfie as I had only paid for one.

After the meet and greet, I was overwhelmed by the sheer magnitude of the con and how many vendors and people were there. The body odor was overwhelmingly strong. My wife suggested that the next con we go to we bring Vicks to put under our noses. I had a hard time pacing myself with my available funds because I almost blew it all during the first hour. Subsequent comic cons I have held off on spending any money until I see everything on all the vendors tables. My wife and I had such an amazing time there for those two days that I have been hooked ever since. 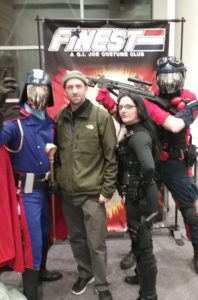 I started collecting G.I. Joes at the age of 8 and I think I started collecting comics, mainly DC, at around 12. I remember my first comic book was Justice League International #1. I thought the cover art was so cool with the heroes looking upwards at the reader. I had an elementary school mate whose father owned a store which carried comics and he gave me a discounted rate when I would show up with my father. I only stopped collecting comics during the four years I was in the Marines, because I didn’t have the time or money. I stopped collecting G.I. Joes during this time too because I just couldn’t find them where I was stationed. Upon getting out of the Marines I resumed my childhood hobbies of collecting. I now have over 2000 comics and 300 G.I. Joes and vehicles.

November 10, 2017: After checking the Rhode Island Comic Con website, I noticed that the 3 day passes were sold out. I was confused as I thought I would be able to buy them at the door for my wife. I didn’t need one since I had been approved for a press pass. I contact her, and we get through the problem and my wife and I are all set to go.

We leave at 10:00am and arrive in Providence around 3:00pm, the exact time the con opens. We get checked into our hotel which was walking distance to the Dunkin Donuts Center where the con was being held. We walk past the line of costumed attendees and make our way to the back entrance where the press is able to enter. Once inside, we were a bit confused because we were thinking the comic con was just the concourse part of the arena. We start to navigate our way through the throngs of people and make our way down to the floor where the big-name celebrities were doing signing and photo ops. I asked the guys which line was which as there were two lines. One line he tells me is for people who bought tickets online and are waiting to pick them up and the other line is for people wanting to buy tickets. The former was a lot longer than the latter. My wife and I decided to go back up and look around some more. We go back up to where the people were coming in through the metal detectors and noticed a side ramp that went up to the Rhode Island Convention Center. This is where all the vendors and some of the other celebrity guests were, who I guess the organizers must have deemed would not need that big of a cordoned off area of blue felt ropes for fans to wait to meet their favorite stars. I had to decide who I wanted to meet since this was the first comic con I had gone to without buying photo op tickets beforehand. I really wanted to meet Johnathan Frakes or Michael Dorn of Star Trek: The Next Generation fame. I noticed them both looking very happy and smiling. I decided on meeting former 6 time World Champion, WWE Superstar Christian, who was ten dollars cheaper for a combo photo, autograph, and selfie. 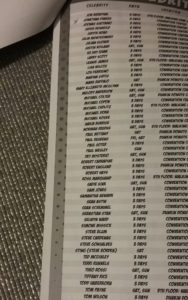 November 11, 2017: My wife and I get up and do our regular hygiene routine and head out the lobby door to the con. My first priority is meeting Christian. After getting to meet Christian, mine and my wife’s game plan of how we wanted to navigate the con went out the window. I wanted to go up and down the aisles so as not to miss anything, but we kept getting sidetracked by everything that was on display and the number of people there made it difficult to stick with the plan.

I ended up spending about $800 on merchandise and the meet and greet, excluding the $416 for two nights in the hotel. I picked up some very cool DC merchandise at some of the booths and talked to comic artist and Eisner Award winner, Joe Staton who had a very cool Justice Society of America poster that I just had to have. I noticed his artwork had the DC copyright and trademark symbols and I asked if everyone at the comic con was supposed to get permission from DC, Marvel, or whoever owns the property before they can sell their works. He told me yes, they are supposed to. He said he even carries a letter from DC stating that he is allowed to sell his own artwork that has DC characters’ depictions. I paid him the thirty dollars that he wanted and made my leave after wishing him a great weekend. Then I met Terry Huddleston of Deviant.com who had an amazing Justice League poster that I had to have. Then he persuaded me to buy a Teen Titans poster to go with it.

At about 2:00pm I come across a vendor who was selling something very unique. He called it Scratchboard Art. He was also a writer with three books for sale; the Gridiron Conspiracy trilogy. His name is Christopher R. Paniccia. I asked about his art and he explained it to me how it was like the reverse of ink-to-paper, how this is taking a piece of black ceramic and scratching away until the white shows in the form of whatever you are trying to create. We got to talking about the military because he had a Desert Storm Veteran hat, I told him thanks for his service and he told me about his time as a Pararescue Jumper in the Air Force, arguably the most difficult job in the military. He saw my press pass and asked if I had interviewed anyone yet. I told him I had to set that up in advance. He said no you don’t, you can interview me if you want. I said that would be really cool. We set up a time for the next morning, but that fell through, so I was able to interview him later at about 4:25PM. I thanked him after the interview and told him I would email him when I was done writing it and told him the twitter handle of GWW, the outlet that I represent so he could read it online when it’s posted.

After walking around with my wife, we came across a vendor who was selling some very interesting DC artwork. I bought a panoramic poster of Batman that was inspired by the Last Supper. I don’t know if this constitutes sacrilege or homage considering that I am a Christian. We decided to leave at 7:00PM and went to the Providence Mall where we ate dinner at the Cheesecake Factory.

The Rhode Island Comic Con was a little chaotic, but all in all, we had a great time. We are planning on going to the one next year as well as other cons and my wife mentioned how she wants to start doing reviews too.

Compared to all other comic cons we have been to, I give this con an 8 out of 10 stars for quality of guests, celebrities, vendors, and artists. I would have given it higher, but the security was not up to the standards that I would like to see, and the layout of the event was labyrinthian.