Fork in the Road a Batman #18 REVIEW 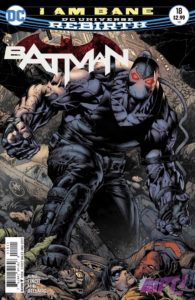 Batman #18 arrives on the heels of a great preceding issue as part of the continuing and exciting ‘I Am Bane’ arc that sees Tom King dealing with his first A-list villain. It feels good to have arrived at this moment, mostly because King is doing interesting things with the showdown, foregoing the usual plotline of pointing out how powerful Bane is. In #18 we get a compelling look at hero and villain, side by side through the years.

Mixing up the format and the chronology of a given issue is a well to which King has returned a few times already, but he never quite implements the presentation in the same way. #18 delivers the best of these instances. As Bane and Batman present their best cases as to why the other needs to give up in present day, we see the origins of both characters from their seminal moments responsible for who they’ve become. Both look on as their parents are 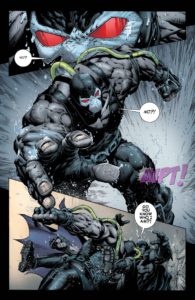 murdered before their eyes, but pay close attention to the words they express from that point. A path diverges between the two strangers, one that presents an intriguing example of nature versus nurture. Bruce, growing up privileged as he did, found it easier to focus on justice and what is right, while Bane grew up with hate where his heart should be.

Bruce was sheltered by Detective Gordon and Alfred, while Bane was handed around by strangers and the unforgiving Santa Prisca system. Bruce was fed Alfred’s faithful attempts at his mother’s recipes seated at luxurious dinner tables, Bane scrounged on uncooked fish in an empty, lonely cell. This presentation is the crowning achievement of King’s work so far, juxtaposing how heroes and villains are born of the same cloth with sometimes subtle — and sometimes drastic — differences. Where the arc physically goes from here, we know by the end of this issue. But in terms of actual events that will play out, it’s all a mystery right now, though I’m hopeful the author and the rest of the team can keep up this fantastic level of storytelling.