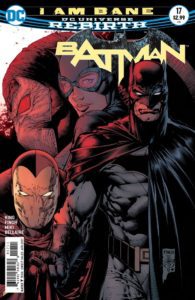 Before joining GWW, I read all my comics in trade paperback form. A full arc in one sitting was always preferable to me. When I got here, it took some time to adjust to, both as a fan and a writer. Some issues, I learned, don’t stand well on their own, but serve the greater good of the story being told. I mention this not because Batman #17 is such an example of that, but rather because it manages to find a pace that excites on its own without throwing in more than it needs. It’s a great example of how a single issue should be written.

King’s “I Am Bane” arc is shaping up to be the best so far. The opening to this issue was one of my favorite scenes King and Finch (or any of the series’ illustrators) have done together. I’m typically a strict Batman-only fan that honestly finds it hard to care about any other Justice Leaguers, but Superman’s call to aid for the Dark Knight was drawn and written perfectly. The best comics, for me, result in me imagining what they would look like as moving images in movies or TV and this intro did exactly that. I could sense the atmosphere in the Fortress of Solitude as Batman asks for Superman’s help. His request carried the right air between two allies with a rocky past. 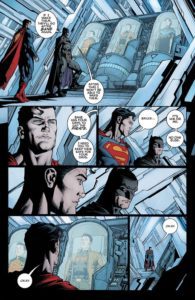 With that memorable scene also comes the expected 180 on last issue’s cliffhanger. This is something comics do much too often in the issue to issue format, which again reminds me why I prefer trades, but since the fates of last issue’s in-peril heroes were so obviously going to be overturned, at least it happened in a cool way.

For an issue that featured surprisingly little Batman himself, #17 was all at once exciting and eventful but remains mysterious with plenty of proverbial meat on the bone for the next issue. With Bane ow in the city limits, all hell is about to break loose. As readers, these are the moments we crave.