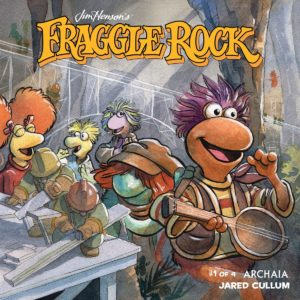 Boom studios brings back the Fraggles of Fraggle Rock in a heartwarming issue #1. The Jim Henson company are a beloved favorite to many and this issue will please fans both old and new. The story centers on the Fraggle Mokey having lost her muse to paint and searching the caves of Fraggle Rock for inspiration. Boober, Lanford, and the Fraggles begin to question Mokeys absence from the group and set out to help her. Their attempts come up short and Mokey continues not to paint. While an announcement of an art show sends Mokey further into the caves. Will Mokey find inspiration down in Fraggle Rock?

From the very first words in the comic, it filled me with nostalgia, with it opening to “Down in Fraggle Rock…”. Instantly making me smile as I begin it’s simple yet charming story. It’s obvious this is aimed at a younger audience but it has enough nostalgia to please fans who grew up watching this. It plays out like an episode of the old show and each character acts just as they used to. With Boober being the joker of the group and  Lanford being the concerned Fraggle. The art is well suited to its younger audience and I could see me reading this to my son at bedtime. The art is brilliant and uses bright colors mainly for the characters to make them pop. While I found the use of color in the flashback panels a great touch using mainly grey. It’s a nice touch and made the flashbacks seem real to the story. It’s really straightforward to follow through its pages and is a relaxing read similar to watching one of its episodes. It balances just the right amount of childlike fantasy with some inspiration for both young and old by its final panel. I was surprised by the ending words although those familiar with the tv show will know it usually ends in a positive note. It made me feel inspired to see Mokey inspired and it’s a great way to end the first issue.  This is issue #1 of four and it seems each issue will be individual rather than a story over the four. With its younger audience in mind and it’s “bedtime story” feel this makes sense to do so.

I had a great time reading this issue. It made me remember the show from my youth and had me singing the theme song to myself. I enjoyed this as an adult with nostalgia and had a blast through all it’s pages. Fans of old will love its art and memories it brings. While new, younger fans will love its cute characters and inspirational messages. Would this appeal to a mature audience who haven’t seen the old show? Probably not but it would be hard to find a maturer comic reader who hadn’t already heard of them. It’s a four parter and will be a nice set to own. I’m going to give this a score of 7 for making me remember how much I loved this show and for bringing it back for a new generation. My advice is to head down to Fraggle Rock and pick up this issue today. It’s an excellent nostalgia trip.