Perfect for your Thanksgiving or ‘Friendsgiving’ feast, or for gifting during the winter holidays along with the Game of Thrones: The Complete Season Seven Blu-ray/DVD (available December 12th), Winter is Here will also be released in a collectible gift pack alongside the previously released Fire and Blood Red Ale and a special commemorative glass. 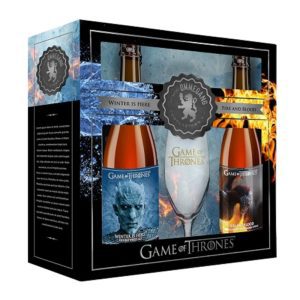 To find the all-new Winter is Here beer or gift set near you, visit http://ommegang.com/blog/beer-finder/

Winter is Here is brewed with pilsner malt, white wheat malt, and soft red wheat flakes, hopped with Saaz hops, and spiced with white pepper, sea salt, coriander and sweet orange peel. Brewery Ommegang’s house yeast is used in primary and secondary fermentation. This double white ale pours a hazy pale straw color with a stark white head. Aromas of banana, clove, and pronounced peppery phenols lead, and the flavor is slightly sweet malt, subtly balanced by hints of sea salt. Despite a full mouthfeel and healthy ABV, it still manages to drink quite lightly. The finish gradually builds in a warming crescendo of peppery spice.

Have you seen this:
May Calamawy Joins the cast of Marvel's Moon Knight

Fire and Blood was the third beer in the collaborative series, originally released in spring of 2014. It’s brewed with pilsner, spelt, rye, and other specialty malts, hopped with Styrian Golding and German Tettnang hops, and spiced with ancho chilies for additional complexity. The hue is deep, dark red with a persistent, creamy, off-white head. The aromas of ripe fruit, raisins, slight spice and malt mix nicely with a slight floral, spicy hop character. The flavor of sweet malt gives way to faint dryness and is balanced by spicy rye and hop flavors with underlying raisin and prune notes. The finish offers balanced malt and spicy characteristics from hops and rye. Fire and Blood is 6.8% ABV, and the label art features one of the original three labels, a fiery image of Daenerys Targaryen’s dragon, Drogon.