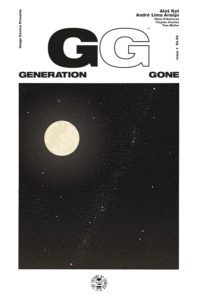 Generation Gone is a new series by Ales Kot, that revolves around three millennial hackers and a government engineer that has figured out how to give humans superpowers.

The synopsis leads you to believe that this series is will be some type of Chronicle type story, but this was a far cry from the regular sci-fi fare. This issue felt more like a drama than anything else. It connected me with the characters to the point where I think of the superpowers a secondary storyline. Just from one issue alone, I can tell this is a fresh take on a familiar story.

There are four protagonists altogether: The three hackers and an engineer. Two of the hackers are named Elena and Nick, they are involved in a very toxic relationship. Admittedly some of Nick’s mental abuse felt way over the top, but effective. Not everything he said to Elena sounded natural or like something someone would actually say to their girlfriend. The way he talked down to her and expects her to appreciate him, it was tough to read. Her motivations were laid out in plain sight, while we only get a few hints at what makes the douchbag tick. I may be a superhero loving geek, but I’m also into relationship dramas, so I am very intrigued by these two. 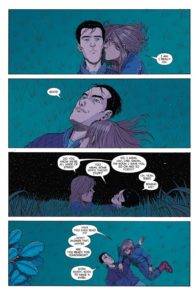 Baldwin is their friend and the last of the hackers, but the story doesn’t delve too much into him yet. As for Akio, he clearly has bigger aspirations than making weapons for the government. I like him clearly because he’s a character that doesn’t blurt out his thoughts. No thought bubbles, and he kept everything close to his chest. He created a code that would unlock powers in the human body, but you can’t tell if he’s totally benevolent. He appears to have the best of intentions with project Utopia, but he plays coy quite a bit in this first issue.

I don’t know the artist very well, but I thought the art in this comic was great. His style fits this drama type sci-fi story very much. No action scenes just yet, but a lot of interesting looking characters, and even some robot mechs. There were a lot of single colored backgrounds used that I didn’t notice on my first read through. The panels were simple but not boring by any means. There was a lot of emotion in each scene.

There were a few parts that felt a little preachy, and there wasn’t a ton of excitement in this issue. But what I got was a compelling sci-fi drama, that features complex and interesting characters. This first issue probably won’t blow your mind, but it will hook you. Plus, that last panel and the preview for the next issue hint at a completely different dynamic between the characters happening.