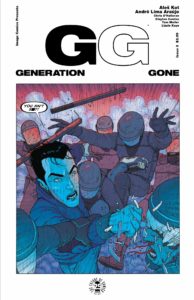 Police move in on peaceful protesters which causes Nick to lose it. Now the three friends are out on the run, as General West hunts them down.

This series is equal parts science fiction and social commentary. If the X-Men were sworn to protect a world that hates and fears them, then these kids were born to distrust a world that disvalues and lies to them. They are truly a product of their surroundings, both in their powers and in their attitude. Akio seems like less of an imprudent god in this issue, and more like a force of nature. It takes a very fantastic set of circumstances and places it in a real-world setting, that is eerily close to what we can see now outside out windows.

Nick has reached the point where if I have to read through some kind of redemption arc I’m going to be very uncomfortable. That level of hatred for a character came very fast. I don’t think I even disliked Joffrey from Game of Thrones this quickly. He currently has no redeeming qualities, which makes him feel a bit one-dimensional. Considering how good a writer Ales Kot is, I expect Nick to be fleshed out much more, especially if he isolates himself. His rampage, though somewhat justified, really put Baldwin and Ellie in a bad position. The ending was expected and felt hinted at in the previous issues. I don’t foresee Generation Gone becoming a sweet young-adult romance comic, so I doubt Baldwin’s powers will be able to heal all pain. 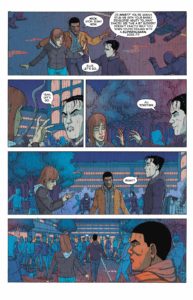 The highlight of the issue for me was Ellie’s mom telling off General West. Both mother and daughter have been through a lot so it makes sense West’s attempt at candidness was brushed aside. Aiko’s initial reaction to everything was frustrating at first. He seemed to have no real plan to help these kids who he’s given godlike powers to, and it didn’t seem to care what dangers they’d be in or might cause themselves. But by the end, he seemed more confident in their survival than unsympathetic.

So early in this series artist, André Lima Araújo appears to already be hitting his stride. He’s credited as a storyteller, and I’m not sure if he contributes on the writing side at all. but he really is a fantastic storyteller. Each panel, each sequence, each emotion methodically moves the story forward. Though there’s action, this issue is centered around two conversations, and both convey a lot of emotion thanks to this art team. Colors and letters stepping up are just as essential in this type of comic book.