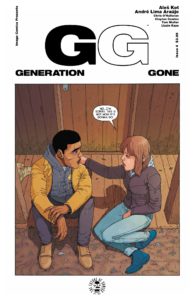 Nick continues his rampage and heads to the place that caused him so much pain.

I admit it, through all the yelling and fighting, part of me just wanted everyone to sit down and talk it out. Sure, it wouldn’t be the most exciting issue, but things are becoming way too hectic.

Nick has lost control, and we may finally find out what happened to his brother soon. I’m glad Aleš Kot is getting to the incident right away, Nick is such a loose canon that some semblance of closure could change the dynamic quite a bit. Elena also went on a rampage of her own after Baldwin put the moves on her. There are two things I’ve learned from online feminists: 1. Max Landis is the devil, and 2. The friend zone is when a dude feels he’s owed something from a girl just for being nice to her. And that’s how Elena took it. Baldwin has had the least character development, so it’s hard to know how he truly meant it. I hope we get some more background on him soon because this issue did not paint him in a good light. 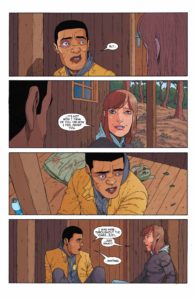 The artwork was spot on as usual in this issue. There was a ton of violence and gore in this issue, which was surprising. With all the messy looking panels used in comics today, it’s nice to see a four-panel layout being utilized. It allows plenty of room for action, yet doesn’t ever feel cluttered.

It’s comic books, so I feel there is more to Akio’s story to come in the future, but his first conversation with his creations certainly didn’t go the way I expected. As bad as things are for everyone, Elena may have the most tragic story, especially if she has to deal with two toxic relationships. I do enjoy reading the drama unfold, but some levity in the next issue would go a long way. The intensity of each character is almost suffocating.

I’ll give Aleš Kot this, he’s not afraid to give readers complex morally ambiguous characters, and it’s made each situation unpredictable.