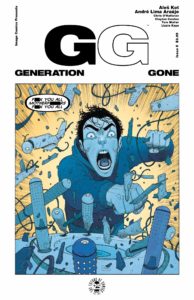 Nick continues his rampage at a nuclear facility, which leaves Ellie and Baldwin to stop him.

The final issue of act one ends in an incredibly violent and tragic way. We were given three characters who were created by a government that they despise because they feel neglected or hurt by them. It’s hard to say that the fight scenes were good when some panels were straight up uncomfortable to read. Superpowers or not, the relationship between Nick and Ellie made their fight quite unsettling. This has been a very interesting story and a puzzle that I don’t think we have all the pieces to just yet.

The pacing was done well. My initial reaction to this issue was that it felt rushed, but the epilogue really helps the reader settle in for the long haul. Unfortunately, we are going to have to wait until sometime next year to read the second act. Ellie is the only one going down the path she desired, while Baldwin and Nick have taken quite the turn. 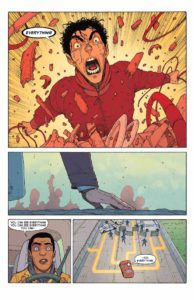 This was the first comic book by André Lima Araújo that I have had the chance to read, and I really enjoyed his artwork. It was a very toned down realistic look at what could be considered a sci-fi comic. It reminds me a little of Frank Quitely’s style. He has another comic coming out soon, I only hope he returns to act two.

The first act had a solid finish after the very interesting and dramatic start. This was a nice twist on the super-powered beings genre, in that it was very personal and focused on the characters reactions to getting powers. This has been a great new series.