DC Comics continues to impress and draw in fans with their sweeping DC Rebirth storyline across their entire roster of heroes. While fans have been eagerly enjoying each reveal and story, they are still curious as to the force behind the scenes. 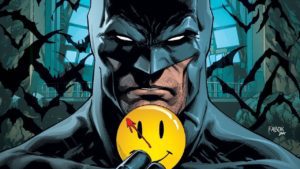 President and CCO of DC Comics Goeff Johns released a video teasing his upcoming 12 issue series titled Doomsday Clock. In the video, Johns confirms that an ongoing fan theory is valid: Watchmen’s Dr. Manhattan is the force behind the events of DC Rebirth. Johns talks about his inspiration for the story and his collaboration with artist Gary Frank to bring the “thought-provoking” story to life.

In addition to Dr. Manhattan featuring prominently and in direct conflict with Superman, what other moments could we see in the upcoming arc. One of the things teased in the video along with images online is that Lex Luthor himself will feature prominently in the series. Could the hand on his shoulder belong to Ozymandias? Could we see the return of Nite Owl and Silk Spectre sometime in the future? 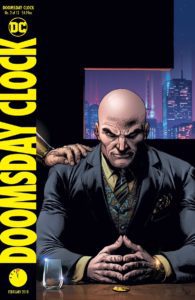 As much as I enjoy speculating, I am excited to see what happens this fall when Doomsday Clock Premieres.

Doomsday Clock from DC Comics will be released November 22, 2017.